By David Ezra Stein
A zany tale about a little chicken's impatience and creativity.

In this zany tale written and illustrated by David Ezra Stein for children ages four through eight, a little red chicken is ready for bed. Her father, a patient rooster, waits in her bedroom to read her a story. But he warns her not to interrupt the tale. He reads her Hansel and Gretel but she can't help herself. She warns the children in the story not to go inside the house since there's a witch there ready to eat them. Her father tries to calm chicken down but she's all riled up. His readings of Little Red Riding Hood and Chicken Little are interrupted as well. Her father suggests that she tell him a story. When chicken reads her story she is surprised by his response.

The Interrupting Chicken by David Ezra Stein was a Caldecott Honor Book, and it's easy to see why with its lovable father and daughter interaction, it humorous take on the little chicken's aversion to sleep, and her father's patience with his offspring's creative contributions to his storytelling efforts. 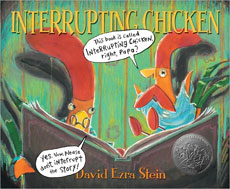