By Gerard Thomas Straub
A complex and rewarding meditation upon the lives of Francis of Assisi and Clare.

Gerard Thomas Straub is a former Hollywood television producer whose credits include three popular soap operas. This compelling, pensive, and idiosyncratic resource charts his four-year meditation upon the lives of Francis of Assisi and Clare. At the outset, Straub is intrigued with the idea of conversion, especially as a change of heart. He sees Francis and Clare as saints of incarnation: "There was a visible manifestation of the conversion process going on inside of them. They preached by the witness of their lives. Their lives were their sermons. And those sermons still have something to say to us today."

On his Franciscan pilgrimage, Straub keeps a diary, stays at Italian monasteries, visits the town of Assisi, and marvels at the artist Giotto's interpretation of the great saint's life and works. He writes: "Pilgrims go knocking on God's door. The pilgrim seeks new ways of seeing and understanding; ever restless, one combs the unknown land for new information and insights. Questioning is at the heart of spiritual pilgrimages. Removing themselves from their own personal duties and dramas, pilgrims go on a search for answers to the questions that burn within them. The pilgrim is not someone who is running away from something . . . he or she is running to something. The pilgrim is an explorer, an adventurer, a dreamer."

Not a bad summary of Straub himself as he dives deep into the spiritual mysteries of prayer, poverty, silence, and solitude as reflected in the lives of Francis and Clare. The former, who was painted by Rembrandt, filmed by Zeffirelli, and picked as the patron of the "Beat Generation" by Kerouac, believed poverty to be the core of all sanctity. Straub, who is used to an affluent lifestyle, struggles with this asceticism throughout the book and provides the reader with a smorgasbord of thoughtful quotations on the subject: "Francis loved the radical insecurity of poverty because for him it was the ultimate act of faith in the providence of God. To imitate Christ, which was his sole goal in life, meant living a life of extreme self-denial."

The Sun and Moon Over Assisi is a potent and powerful devotional work that schools us in the spiritual practices of humility, self-simplification, listening, and love. It is a tribute to Francis and Clare that centuries after their deaths they still can stir the souls of those open to the grace of God and the fires of personal transformation. 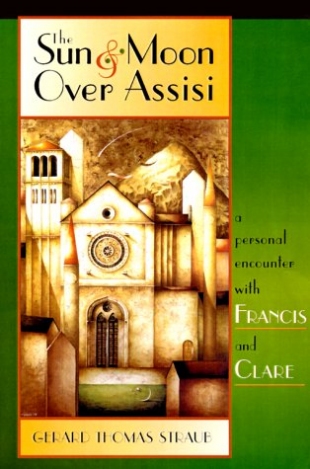