Charles de Foucauld (1881-1916) was born into an aristocratic family in Strasbourg, France and served as a soldier and explorer before becoming a Trappist monk. Trying to emulate "the hidden life of Jesus," he worked as a servant at a convent of Poor Clares in Nazareth for three years. He then spent 15 years in the desert of Algeria as a hermit. He was murdered there by Tuareg rebels. His life and witness eventually led to the founding of the Little Brothers and Little Sisters of Jesus who vow to serve the poor and to witness to the love of God for all people.

Robert Ellsberg (All Saints) celebrates de Foucauld's passion for Jesus, his love of the desert solitude, and his new model of contemplative religious life. At one point, this modern mystic wrote: "I do not think there is a Gospel phrase which has made a deeper impression on me and transformed my life more than this one: 'Insofar as you did this to one of the least of these brothers of mine, you did it to me.' " In his devotional writings, de Foucauld explains what it means to embrace the spirit of Jesus' hidden life, to take the lowest place, to preach the Gospel silently, to live in poverty, and to be a "universal brother."

Reading this eye-opening collection of de Foucauld's writings, it is easy to see why many regard him as one of the great spiritual figures of the twentieth century. This volume is part of Orbis's Modern Spiritual Masters Series. 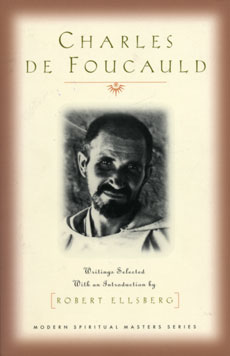