The Little Book of Restorative Justice

By Howard Zehr
A terse but illuminating overview of an important movement that has the potential to transform the crimes, disputes, and enmities that cause division in communities.

In North America and elsewhere, many people are convinced that the criminal justice system does not meet the needs of victims, offenders, and communities. Often, this adversarial process seems only to accentuate anger, hatred, and separateness rather than bringing about healing and peace. Restorative justice is a global movement started in the 1970s that has led to the creation of thousands of approaches and programs in different countries. For example, since 1989 New Zealand has made restorative justice the centerpiece of its entire juvenile justice system. Ever since the Truth and Reconciliation Commission in South Africa, groups have become much more keen on applying restorative justice to situations of mass violence. Other agencies are using restorative approaches such as "circles" (a particular practice that emerged from First Nation communities in Canada) as a way to handle and work though disputes in general.

Aware of all the applications and complications of restorative justice, Howard Zehr, co-director of the graduate Conflict Transformation Program at Eastern Mennonite University, sets out in this handy and clear-sighted paperback to outline its major principles, philosophy, and guiding questions. The author of Changing Lenses: A New Focus for Crime and Justice has been called "the grandfather of restorative justice." He is convinced that it provides an alternative framework for thinking about wrongdoing.

Zehr observes early on: "Restorative justice requires, at minimum, that we address victims' harms and needs, hold offenders accountable to put right those harms, and involve victims, offenders, and communities in this process." Then, to clarify the term even more, he explains why it is not primarily reconciliation, mediation, a blueprint, intended for minor offenses or for first-time offenders, a replacement for the legal system, an alternative to prison, or the opposite of retribution. In a key passage Zehr emphasizes: "Ultimately, one basic value is supremely important: respect. If I had to put restorative justice into one word, I would choose respect: respect for all, even those who are different from us, even those who seem to be our enemies. Respect reminds us of our interconnectedness but also of our differences. Respect insists that we balance concern for all parties." Another key point is that this practice "encourages outcomes that promote responsibility, reparation and healing for all."

In restorative justice, all the interactions between people are taken seriously and honored. The Little Book of Restorative Justice by Howard Zehr should be required reading in all civics classes and studied as part of the social ministry programs of churches, synagogues, and mosques. This is a growing movement whose time has come. 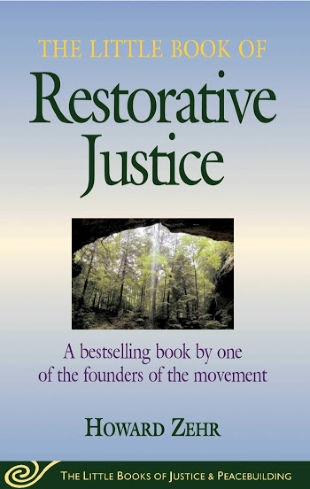