Mary of Nazareth, Prophet of Peace

By John Dear
A poignant revisioning of the mother of Jesus as a practitioner of nonviolence and peacemaking.

Mary has always occupied a special place in the hearts of Catholics, and as more attention has been given in recent years to women's spirituality and the Sacred Feminine, she is now cherished by many Protestants as well.

Few Christians realize that Mary is also deeply venerated in Islam. She is with Hadija and Asiya, wives of the Prophet Mohammad, and Fatima, his daughter, one of the four women in whom Islamic tradition recognizes the "station" of perfection. It is reported that when the Prophet was clearing the idols out of the Kaaba in Mecca, he allowed a fresco of the Virgin Mary holding the Child Jesus to remain. In every Muslim mosque, the "mihrab" or prayer niche in the wall is dedicated to Mary. In the Koran, she is described as having been sent as "a mercy for the worlds."

It is very appropriate, then, in these times of great suffering and peril for Christians and Muslims that we invoke Mary's nurturing presence and compassionate love. John Dear's short but poignant paperback Mary of Nazareth, Prophet of Peace is a good place to begin.

Dear is the former executive director of the Fellowship of Reconciliation, the largest interfaith peace organization in the United States. He is a pastor, community organizer, lecturer, retreat leader, and author/editor of more than 20 books on peace and justice. This one had its genesis in a 2001 retreat and in his belief that Mary's story gives us "a shining example of the journey of the peace of God." This is in direct contrast to the war-making of human beings. Dear writes:

"The history of war has proved that violence is not just immoral and illegal, but downright impractical. It simply does not work. It cannot solve our problems. It only foments further problems down the road. It leaves a trail of blood, bodies, tears, and resentment. Violence in response to violence can only lead to further violence.

"The great lesson the twentieth century is that war has not resolved our problems and brought us peace. It has only led to greater militarism and more war. This destructive behavior cannot go on forever. At some point, the world will break. This is our future if our present course continues."

Mary, the Mother of Jesus, was familiar with the culture of violence and the many ways in which it violates the bodies and souls of those who must bear its furies and indignities. Dear finds in her life a three-part movement that can provide for us a way to move through the storms that surround us in wartime.

In the image of the Annunciation, Mary surrenders herself to God and moves into solitude. In silence, she waits and listens for divine direction. The author believes that in times of peril, we need to do the same — to give the Holy One our anger, violence, and vulnerability, and to disarm our hearts. He calls this Mary's stage of contemplative nonviolence.

In the story of the Visitation, Mary responds to her own connection with God by reaching out to help Elizabeth. This, according to Dear, is the movement from contemplative nonviolence to active nonviolence. He takes a brief look at the works of mercy practiced by Dorothy Day of the Catholic Worker who was also a practitioner of nonviolence and a tireless activist for social justice. The lesson here is that we must practice loving-kindness in our families and communities. Building peace starts where we are and takes place in how we treat those nearest and dearest to us.

In the third stage of Mary's journey, her Magnificat emerges not just as a hymn of praise to God but also as "a manifesto of revolutionary nonviolence and a call, not to arms, but to disarmament and justice." Dear points out that the Magnificat was banned in Argentina after the Mothers of the Disappeared in Argentina used it to call for nonviolent resistance to the ruling military junta in mid-1970s. But 2,000 years after what John Dear calls "Mary's prophetic nonviolence," the radical nature of her message has been watered down by many Christians around the world who ignore the plight of the poor and the suffering of those in war zones.

John Dear has given us a salutary and powerful reinterpretation of the life and work of Mary of Nazareth. This sturdy volume also contains a thought-provoking foreword by Joan Chittister on American power politics and the need for the spiritual practice of hospitality in a world where we know so little about other countries. The wonder-inducing icons by William Hart McNichols add further luster to our reverence for Mary the contemplative soul, the practitioner of compassion and kindness, and the nonviolent seeker after peace and justice. 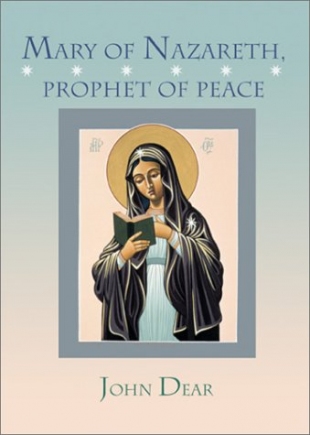