The Guru of Love

By Samrat Upadhyay
An innovative and engaging novel set in Kathmandu about how a family reaps spiritual lessons out of the father's infidelity.

It's 1990, and there is trouble on the streets of Kathmandu, the capital of Nepal. The long-time monarchy is under siege, and strikes, protests, and fights are interrupting the people's daily routines. Ramchandra is carrying plenty of tension in his 42-year-old body and soul. He teaches math at an impoverished school in the city and must tutor students after hours to support his wife, Goma, and their two children. He dreams of purchasing their own house, but meanwhile the family must live in a decrepit apartment.

In addition to these burdens, Ramchandra is treated very shabbily by Roma's wealthy parents, who are always comparing him to his more successful brother-in-law. He wonders why they ever offered him their daughter in marriage. Like many other frustrated middle-aged men in a funk, he falls in love and starts an affair. The recipient of his affection and the source of his runaway fantasies is a new tutee, Malati. She is an attractive, unwed, teenage mother with a baby, who lives in the closet at the home of her uncaring stepmother. This unfortunate young woman yearns for a better life as well but has no idea what is in store for her once she yields to Ramchandra's sexual advances in a Hindu temple. Both of them are surprised by the intrusions of several very aggressive monkeys who scratch her face and steal her sari.

The Guru of Love is the debut novel of Nepali writer Samrat Upadhyay whose collection of short stories, Arresting God in Kathmandu, came out in 2001. Certainly the author's familiarity with the city is a strong point in this story's favor. The interplay between the outer and the inner tensions in Kathmandu and Ramchandra's soul are well realized. But the most impressive thing about this engaging novel is Upadhyay's compassion for all the characters, especially the unusual ways they respond to the jolts of adultery and familial upset. Ramchandra's long-suffering wife comes up with a unique and, in the long run, healing and helpful solution to the affair. Thanks to her wisdom, the act of infidelity becomes a spiritual teacher for all. 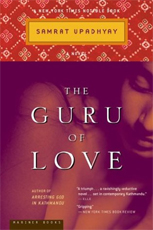