Sacred Speech A Practical Guide to Keeping Spirit in Your Speech

By Donna Schaper
Tutors us in this art that demands discernment, connection, openness, and the powerful energies of love.

Many Buddhists spend a lot of time practicing right speech. They are concerned about the power of the tongue to hurt yet are convinced of its potential to heal. The Desert Fathers and the Hasidic rebbes of early Christianity and Judaism also have much to say about the importance of speech practices. Donna Schaper, a minister of the United Church of Christ and author of Sabbath Sense and other books, explores the nature of what she calls "sacred speech." This holy gift is one we must nurture by practice and intention:

Schaper has years of parish experience and many colorful and entertaining stories about the challenges clergy face in their attempts at speech that carries Spirit (a term for God that the author uses because of its inclusivity).

Sacred speech builds bridges in this time of multifaith exploration. It opens doors and takes risks because it is not afraid of the unknown or the "other." Schaper salutes humility as a lubricant that smoothes the way for speech that carries Spirit. There are chapters on forgiving, praising, praying, judging, lamenting, loving, moving beyond the politically correct, savoring the sacredness in ordinary speech, and appreciating silence. In each of these, we are called reach out to each other through our words in order to maximize love and minimize fear. The miracle of meeting can even go deeper under the auspices of Spirit.

One of the thorniest areas of sacred speech is judging. We live in an adversarial society that puts a high premium on this social skill; conflict is considered natural and even necessary in both the private and public arenas of life. We are always judging this as good or worthy and that as bad and despicable. And, of course, most of us are better at dishing out criticism than in receiving it. Schaper notes how the negative always seems to get preference, recalling how she has sulked over the one negative remark after a sermon rather than relish the slew of positive ones. In a humorous comment, she suggests that clergy wear "bulletproof vestments" to protect themselves from constant criticism.

Yet there are certain times when it behooves us to learn from the judgments that come our way. Equally important is to take up the prophetic mantle now and then and let it rip! Schaper notes: "Judgment can be a sacred act. It can say no at the right time on behalf of loving affirmation of larger principles." Discernment, then, is an essential tool for those who want to engage in sacred speech. Schaper tutors us in this art and makes it clear how speaking with Spirit grows naturally out of a mature faith that has moved beyond either/or rigors. 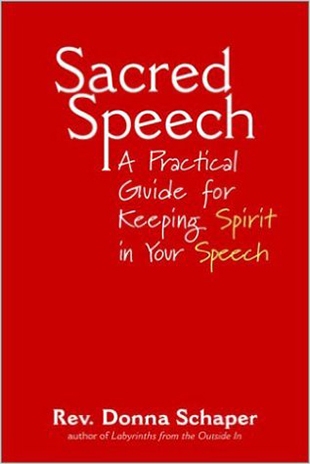