By Anthony de Mello
Prayer practices along with meditation exercises using your imagination.

Anthony De Mello (1931-1987) was a Jesuit spiritual director and retreat leader who lived in India and gave workshops, conferences, and seminars all over the world. He pioneered post-denominational Christianity and proclaimed a lyrical mysticism rooted in story and imagination. Best of all, he presented concrete spiritual practices and exercises designed to silence the mind and give expression to the yearnings of the heart. With more than two million copies of his books in print, de Mello remains one of the world's most popular spiritual teachers.

This paperback focuses on retreats given by de Mello which he carefully edited but never released. The following words convey what was of supreme importance to him: "The greatest need of the Church today is not new legislation, new theology, new structures, new liturgies — all these without the Holy Spirit are like a dead body without a soul. We desperately need someone to take away our hearts of stone and give us a heart of flesh; we need a fresh infusion of enthusiasm and inspiration and courage and spiritual strength. We need to persevere in our task without discouragement or cynicism, with new faith in the future and for the people we work for. In other words, we need a fresh outpouring of the Holy Spirit."

De Mello covers themes that will be of interest to all Christians who are trying to deepen and enrich their devotional life. Check out the chapters on how to pray, the Jesus Prayer, the dangers of repentance, the social aspect of sin, and the kingdom of Christ. We were intrigued with the following observation by de Mello which seems just as true today as it was years ago:

"If the priest comes to the modern world equipped with every conceivable talent but lacks the direct, personal experience of God, the world will simply refuse to take his God-talk seriously and will have little use for him as priest, much as it may value him as an educator or philosopher or scientist.

"What the modern world, and in particular the younger generation, is saying to us today — 'Don't just talk, show me.' — is what India has been saying to us for centuries. I remember the good Father Abhishiktananda telling me, some years ago, of a holy Hindu he met in the South of India, who said to him, 'You missionaries will never have any impact on us unless you come to us as gurus.' The guru is a man who doesn't merely talk about what he has read in a book. He talks from the assurance of his own religious experience."

This spiritual director's insights on miracles, silence, and yearning are presented from the assurance of his experience and also grow out of his knowledge and appreciation of other religions. Best of all is the chapter entitled "Meditation on the Life of Christ" where de Mello gives concrete practices using the imagination. It is very helpful indeed. 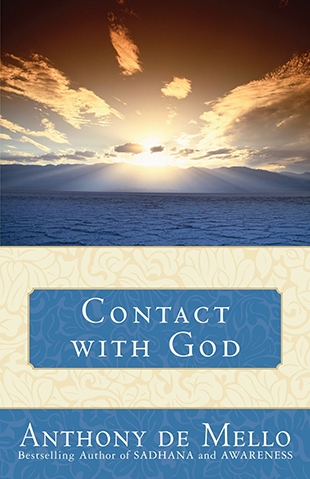