Healing the Soul of America Reclaiming Our Voices as Spiritual Citizens

By Marianne Williamson
Shows how it is possible to turn spiritual conviction into a political force.

"The fabric of American society must be rewoven one loving stitch at a time: one child read to, one sick person prayed for, one elder given respect and made to feel needed, one prisoner rehabilitated, one mourner given comfort," writes Marianne Williamson in this call to spiritual politics. She salutes the rich philosophical and political resources of democracy but laments our current era of passive citizenship. The solution is to turn the tenets of higher consciousness (the power of soul, brotherly love) into major forces for social change. Williamson challenges readers to "embrace the spirit of nonviolence and adopt a personal commitment to conscience, making what efforts each of us can to increase the power of good in the world."

Following in the train of Jim Wallis, Michael Lerner, and others, the best-selling author of A Return to Love lambasts the priority of market values over all other values, the growing gap between the rich and the poor, the business of politics, corporate welfarism, and the poverty and suffering of millions of children in America. She calls for national atonement for the genocide of Native Americans, racism toward African Americans, and the war in Vietnam. Using the moral mentorship of Gandhi and Dr. Martin Luther King, Jr., as examples, Williamson shows how it is possible to turn "spiritual conviction into a political force." Some of her ideas include citizen salons to discuss issues, prayer vigils, and soldiers for peace. 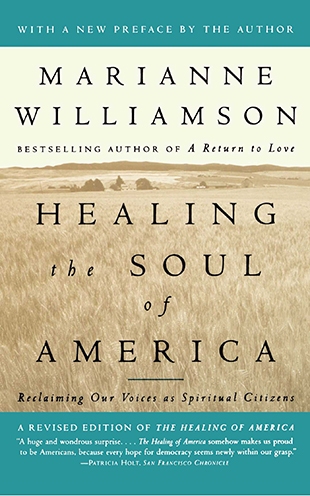