By William Sloane Coffin
A soul-stirring collection of quotations from this preacher's sermons and unpublished speeches overflowing with passion, imaginative political insights, and prophetic commentary on the most troubling issues of the day.

"I love the recklessness of faith. First you leap and then you grow wings," says William Sloane Coffin in this soul-stirring collection of quotations from his sermons and unpublished speeches. This volume overflows with passion, incisive thinking, imaginative political insights, and prophetic calls for action directed at Christian communities. The thematic sections of the book reveal the range of this social activist's interests: faith, hope and love; social justice and civil liberties; social justice and economic rights; patriotism; war and peace; nature; life in general; the church; and the end of life.

Coffin served as chaplain of Yale University and Williams College, was senior minister at Riverside Church in New York City, and is President Emeritus of SANE/ FREEZE: Campaign for Global Security. His opposition to the Vietnam War made the news in the 1960s, and he was jailed as a civil rights "Freedom Rider." Coffin was indicted by the government in the Benjamin Spock conspiracy trial and immortalized as Rev. Sloan in Gary Trudeau's Doonesbury comic strip. He continues to work on behalf of nuclear disarmament. Both Union Theological Seminary in New York and Yale University have established scholarships in his name.

As a Protestant, Coffin puts great stead in faith. Of it he says: "There is nothing anti-intellectual in the leap of faith, for faith is not believing without proof but trusting without reservation. Faith is no substitute for thinking. On the contrary, it is what makes good thinking possible. It has what we might call a limbering effect on the mind; by taking us beyond familiar ground, faith ends up giving us much more to think about." This clergyman has no interest in doctrines and creeds as hitching posts; instead, we should use the love of God as the hitching post. It is a force that brings diverse people together whereas, far too often, doctrines serve as walls that keep people apart. Coffin, in one of our favorite passages, states: "Love measures our stature; the more we love, the bigger we are. There is no smaller package in all the world than that of a man wrapped up in himself."

The selfishness of individuals mirrors the selfishness of nations. Coffin, who is a true patriot, speaks out against certain warps he identifies in the policies of those in power. He laments the growing gap between the rich and the poor. This has created "an underclass [that] has all the markings of a subordinate caste." In a meditation on the line "Give us this day our daily bread" in the Lord's Prayer, Coffin says of Jesus: "How angry he must be with the way our government is now filling the rich with good things, and sending the poor empty away. How he would scorn an economic theory that says we must heap more on the platters of the rich, for only so will more crumbs fall to the poor. Never has a government climbed off the backs of the upper-class so fast to tap-dance on the backs of the poor. Never in recent history have we had so blatant a plutocracy: a government of the wealthy, by the wealthy, and for the wealthy."

Coffin's sermons give ample testimony to Jesus and the power of God's love revealed through him. "Miracles do not a messiah make," he observes. "But a messiah can do miracles. . . . I can also report that in home after home I have seen Jesus change beer into furniture, sinners into saints, hate-filled relations into loving ones, cowardice into courage, the fatigue of despair into the buoyancy of hope. In instance after instance, life after life, I have seen Christ be 'God's power unto salvation,' and that's miracle enough for me."

He urges churches to take up the cause of the poor, the homeless and the helpless. But he knows that congregations that practice justice, even as they walk in the steps of Jesus, risk social censure as progressive do-gooders. "Jesus knew that 'Love your enemies' didn't mean 'Don't make any!' "

What does a politically engaged spirituality look like? Coffin comes up with his own "axis of evil" — environmental degredation, pandemic poverty, and a world awash with weapons. He challenges Christians to speak out against nuclear weapons and the insane American policy of what he calls "nuclear apartheid." He wants us all to work for peace: "Peace does not just come rolling in on the wheels of inevitability. We can't just wish for peace., We have to will it, fight for it, suffer for it, demand it from our governments as if peace were God's most cherished hope for humanity, as indeed it is."

A politically engaged spirituality is animated by wonder and reverence, two practices affirmed in this book. "The longest most arduous trip in the world is often the journey from the head to the heart," he advises. "Until that round trip is completed, we remain at war with ourselves. And, of course, those at war with themselves are apt to make casualties of others, including friends and loved ones."

There is so much more here to take note of and celebrate but, by now, you must have a good sense of the poignancy and urgency of this Protestant preacher's perspective. Let's end with this thought -provoking quotation from William Sloane Coffin: "To know God is to do justice. To recognize this implacable moral imperative of the faith represents the kind of good religion that mixes well with politics." May we all know and experience more of this kind of good religion in the months and years to come. 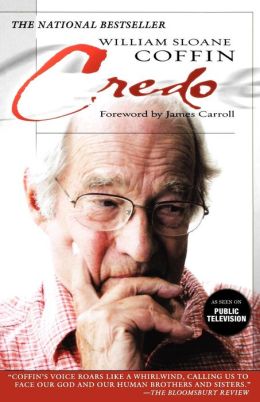