The Essential Haiku Versions of Basho, Buson, and Issa

By Robert Hass
An extraordinary haiku collection with 300 poems by three Japanese masters in this literary tradition.

Poet Robert Haas presents his "versions" of 300 haiku by three of the best practitioners of this literary form from different periods in Japanese history: Basho (17th Century), Buson (18th century), and Issa (19th century). Haiku is a poetic form that traditionally consists of three lines — one of five syllables, one of seven, and one of five — and presents one image, usually from common life in a specific place during a particular season. Haiku is always about being present.

Hass presents a brief sketch of each master's life and then gives ample examples of their poems. Matsuo Basho comes across as the ascetic and traveler whose perception of things is subtle and eclectic. Buson was famous in his time as a painter, and his haiku are especially sensuous; he said that the secret of haiku was "to use the commonplace to escape the commonplace."

Issa has been compared to Robert Frost because he was a farmer poet. Hass notes: "His poems teem with creaturely life, especially the life of the smallest creatures. He wrote hundreds of poems about flies, fleas, crickets, bedbugs, lice." These poets are all delightful companions who tutor us in the art of seeing clearly, paying attention, and living in the moment. 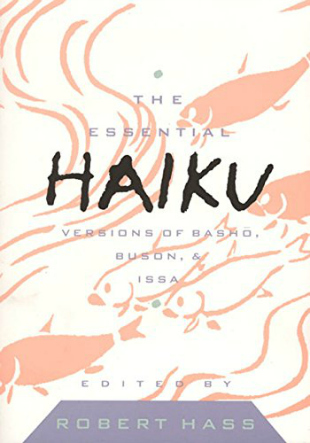