"My story is important not because it is mine, God knows, but because if I tell it anything like right, the chances are you will recognize that in many ways it is also yours."
— Telling Secrets

Listen to Your Life

"Listen to your life. See it for the fathomless mystery that it is. In the boredom and the pain of it no less than the excitement and gladness: touch, taste, smell your way to the holy and hidden heart of it because in the last analysis all moments are key moments, and life itself is grace."
— Now and Then

"The world is full of suffering indeed, and to turn our backs on it is to work a terrible unkindness maybe almost more on ourselves than on the world. But life indeed is also to be enjoyed. I suspect that may even be the whole point of it. I more than suspect that is why all the sons of God shouted for joy when he first brought it into being."
— Telling Secrets

Be A Good Steward of Your Pain

"Being a good steward of your pain. . . . It involves being alive to your life. It involves taking the risk of being open, of reaching out, of keeping in touch with the pain as well as the joy of what happens because at no time more than at a painful time do we live out of the depths of who we are instead of out of the shallows."
— The Clown in the Belfry

Jesus Is Crazy as a Coot

"Literature, painting, music — the most basic lesson that all art teaches us is to stop, look, and listen to life on this planet, including our own lives, as a vastly richer, deeper, more mysterious business than most of the time it ever occurs to us to suspect as we bumble along from day to day on automatic pilot. In a world that for the most part steers clear of the whole idea of holiness, art is one of the few places left where we can speak to each other of holy things. . .

"And when Jesus comes along saying that the greatest command of all is to love God and to love our neighbor, he too is asking us to pay attention. If we are to love God, we must first stop, look, and listen for him in what is happening around us and inside us. If we are to love our neighbors, before doing anything else we must see our neighbors. With our imagination as well as our eyes, that is to say like artists, we must see not just their faces, but the life behind and within their faces. Here it is love that is the frame we see them in."
— Beyond Words: Daily Readings in The ABC's of Faith

Boredom, Should Be a Deadly Sin

"Boredom ought to be one of the seven deadly sins. It deserves the honor.

"You can be bored by virtually anything if you put your mind to it, or choose not to. You can yawn your way through Don Giovanni or a trip to the Grand Canyon or an afternoon with your dearest friend or a sunset. There are doubtless those who nodded off at the coronation of Napoleon or the trial of Joan of Arc or when Shakespeare appeared at the Globe in Hamlet or when Lincoln delivered himself of a few remarks at Gettysburg. The odds are that the Sermon on the Mount had more than a few of the congregation twitchy and glassy-eyed.

"To be bored is a way of making the least of things you often have a sneaking suspicion you need the most."

"To be bored to death is a form of suicide."
— Beyond Words: Daily Readings in The ABC's of Faith

"The visible church is all the people who get together from time to time in God's name. Anybody can find out who they are by going to church to look.

"The invisible church is all the people God uses for his hands and feet in this world. Nobody can find out who they are except God."
— Beyond Words: Daily Readings in The ABC's of Faith

"Compassion is the sometimes fatal capacity for feeling what it's like to live inside somebody else's skin.

"It is the knowledge that there can never really be any peace and joy for me until there is peace and joy finally for you too."
— Beyond Words: Daily Readings in The ABC's of Faith

"Doubts are the ants in the pants of faith. They keep it awake and moving."
— Beyond Words: Daily Readings in The ABC's of Faith

The Rich Cultural Bond of Movies

"In a world where there are no longer books we have almost all of us read, the movies we have almost all of us seen are perhaps the richest cultural bond we have. They go on haunting us for years the way our dreams go on haunting us. In a way they are our dreams. The best of them remind us of human truths that would not seem as true without them. They help to remind us that we are all of us humans together."
— Beyond Words: Daily Readings in The ABC's of Faith

"In his holy flirtation with the world, God occasionally drops a pocket handkerchief. These handkerchiefs are called saints."
— Beyond Words: Daily Readings in The ABC's of Faith 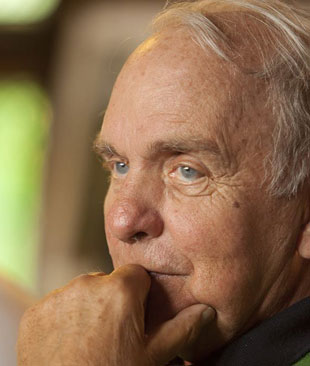