Poet, essayist, translator, and activist Robert Bly died November 21, 2021, at age 94. We trust that, as in his translation of Rainer Maria Rilke's “The Swan,” he let go “of the ground we stand on and cling to every day” and

"is pleased to be carried, each minute more fully grown,
more like a king, composed, farther and farther on."

What he gave us and leaves us is incalculable. Poet Kenneth Roxroth described him as “one of the leaders of a poetic revival that has returned American literature to the world community." Bly was also at the heart of the mythopoetic men's movement. His prose book, Iron John: A Book about Men, remained on the New York Times bestseller list for 62 weeks and helped men mourn the loss of intergenerational role models and initiation rituals in our culture and reconnect with their psyches.

Bly was born on December 23, 1926, in Madison, Minnesota. He attended Harvard University and received his M.A. from the University of Iowa in 1956. In subsequent years he wrote more than 30 poetry books and edited the magazine The Sixties (begun as The Fifties) and numerous poetry collections.

As a translator of poets from around the world, he was a gifted midwife who performed his caretaking functions with creativity and humility. His impact on cultural changes and aspirations is obvious throughout his work, whether in antiwar gems, translations of little known European poets, social commentary, cultural criticism, or recountings of Jungian myths and fairy tales. His honors include Guggenheim, Rockefeller, and National Endowment for the Arts fellowships as well as The Robert Frost Medal from the Poetry Society of America.

The Minnesota Star Tribune reports that his daughter, Mary Bly, spoke with Minnesota Public Radio in 2013 about her father's fading memory: "My stepmother was talking about watching a video of him … and he said, 'I like that guy!' And then he said, 'I wish I knew him.' So it was very hard for my stepmother in that moment. But he's both recognizing what's happening — his sense of humor is not gone at all — and acknowledging that life has different phases."

This new phase of his — passing beyond life — brings us grief at the loss of a great mentor and celebration of a life exquisitely lived. 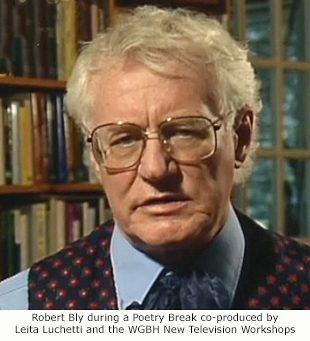