An Interview with Amos Gitai

The director of Free Zone on the themes of the movie.

Amos Gitai has produced an extraordinary, wide-ranging, and deeply personal body of work. Based in Israel, the United States, and France, he has created 40 films, both documentary and fiction. His work explores the layers of history in the Middle East and beyond, including his own personal history, through such themes as homeland and exile, religion, social control and utopia. In this interview, provided by New Yorker Films, he discusses his film Free Zone.

Does the free zone in the film actually exist?

Yes, in eastern Jordan, an area has been set up as an economic free zone. There are no customs and no taxes. People from neighboring countries like Iraq, Egypt, Syria and Israel come here to sell and buy cars. I'm interested in these pockets of freedom in the Middle East where people of different origins can mingle and find things they can do in common. I'm interested in observing how people of the region are connecting to other people through everyday activities, and not only through political gestures. At this point we have been deceived continuously by the big politicians. It's necessary to start with the little details and maybe through these details we can transform our situation. Buying a car, fixing it, crossing the borders, sharing a story, a meal together. . . . I'm interested in free zones where things like this can happen.

And peace exists in this free zone?

Yes. Complete peace. You can even see Israeli buses being sold to Saudis or Syrians. These countries normally don't even have diplomatic relations since they are officially in a state of war. But in the free zone, commerce gives people a kind of pragmatic attitude. I think such a less-charged nationalistic attitude could lead to moving beyond the actual situation. I'm interested in exploring every vector that can create a meeting point. Trade is creating a common ground. People are opening their borders to cooperate and have common projects with economic value.

Borders play an important role in the film.

In the Middle East, borders are a real issue. It's always physical borders, political borders, which lead to mental borders. I've become very interested in borders — how they are crossed, who and what crosses them. My previous film, Promised Land, was about the trafficking of women across the Egyptian border into Israel. In Free Zone, it's about the voluntary transfer of a car across the Israeli-Jordanian border.

You chose an innovative way of setting up the story.

The film starts in Jerusalem in front of the Wailing Wall, the remnant of the sacred shrine of the ancient temple destroyed by the Romans. A young woman, Rebecca (Natalie Portman), is in a car driven by Hanna (Hanna Laszlo). We don't know who they are or where they're going yet, but the journey starts there. To show their memories and also the context in which these women are together, I use a series of layers of images — sometimes eight layers simultaneously. I was interested in exploring how to integrate into the narrative fragments of desynchronized memories. We see Rebecca and Hanna continuing to drive to the Free Zone and at the same time we have this voyage being interrupted and charged with memories and references to how they came to be in this moving envelope called a car.

Three women: one American, one Israeli, one Palestinian. How would you describe these characters?

Hanna, the Israeli, is strong, charismatic, matter-of-fact. A bit of a bully, but also charming. All those characteristics at the same time which is a bit like an Israeli, in general. That's how I see us. Overbearing, but sincere. Not always respectful, but refreshing in a way. That's everything I like and resent about Israelis. I guess it's also a portrait of myself. I'm not different from my people. . . . I always allow myself to be more critical with my people than with others.

Leila (Hiam Abbas), the Palestinian, is more reserved, more respectful of others' personal space. She is shocked by Hanna's immediate informal attitude. Rebecca is a young woman trying to interpret the world for herself, to make up her identity. She's an American with an Israeli father and a non-Jewish mother. According to Jewish law, she is not Jewish. But Rebecca herself feels Jewish, even Israeli.

Did you write the role of Rebecca for Natalie Portman?

The screenplay went through a lot of transformations. The original version was written about men and at one point I decided to make it the story of three women. When Natalie Portman came to the project, we had a couple of early conversations and I decided to integrate some of her biographical elements into the story. I thought it would be interesting to have somebody from outside, kind of having her own point of view about what she sees and how she understands it, how she interprets it. Unlike Rebecca in the film, both of Natalie's parents are Jewish. But like the character she plays, I think she's researching who she is, what the world is about. I think she's using cinema in a good way as a means to exploring and understanding the world, which is something I try to do myself.

In a similar way, you also integrated into the film the real stories behind the locations.

Sometimes I like very much when a film location has a kind of an echo into the narrative. The oasis in Free Zone is actually a place where a Palestinian man, Mussa Alami, founded a farm orphanage for Palestinian refugee children after 1948. It's a place I remember reading about when I was 16 or 17. During its history, two attempts were made to burn it down, once by Palestinians, once by Israelis. I used the true story behind this farm to enrich the narrative of the film.

Leila, Rebecca, and Hanna arrive at this oasis to discover the farm on fire. How is this a turning point for the three women?

Leila is a modern woman. She doesn't want to oppose society, but she also wants to be free and independent. That's exactly what her husband's son refuses. From this point on, the relationship between the three female characters changes. What began as only a kind of pragmatic mutual need turns into an emotional solidarity — Hanna will attempt to help Leila cross the border back into Israel.

So instead of showing off the archaeological beauty of Jarash, you preferred to use a simple gas station to stage the scene where Rebecca is friendly with the Jordanian owner.

I'm interested in modernity. I want to show the modern aspect of the Israeli or Jordanian or Palestinian existence. I think connections are created in a modern context. In the archaic context, each side remains attached to its nationalistic attitudes or national shrines. Modernity has both good and the bad aspects. Shrines have been destroyed, but a common tissue, a common way of communicating, can be created in its place. I didn't want to show the exotic Jordan of camels in Petra and beautiful sunsets. I wanted to show Jordan through its vitality, through the pulse of life, through the highways, the busy streets of Amman. This kind of modernity is for me the fabric of what connects places.

Free Zone appears more peaceful than some of your previous films.

More and more, I stress humanizing characters, to find ways to express their complexities and contradictions. The characters shown are accessible. Each one with its purposes, its rhythm, potential for anger, disagreement, love, affection. In a way, the film loves all its characters. This represents an understanding of relativity. By establishing relativity, the characters are softened. Not every film should be about rage.

Are you optimistic about eventual peace in the Middle East?

The Europeans, 50 years after they burned the entire continent and killed tens of millions of people, came to the simple conclusion that they are allowed to have conflicts, but they just don't need to kill for it. I think that relatively in the Middle East we did not kill so many people and we have not created such outrageous things as have happened in Europe. But it's definitely time for us to understand that we are entitled not to agree and even to have conflicts, we just don't need to have wars each time we disagree. We have to find other ways to negotiate our differences. We are not obliged to create a uniform society, a uniform Middle East. We can still hold on to our different cultures, our languages. We can continue to disagree. Even if there will be peace, there will remain conflicts. Maturity is about disagreeing without using force. This is true for personal relations and entire nations.

Why did you choose to make a film with only women as the leading characters?

Men are the generals, the military guys. They're usually the heads of states in the Middle East, with the exception of Golda Meir. We see the great achievements of men as keeping this area in constant war. It might be interesting to allow women to take over. Maybe they would apply a more down to earth and humanistic vision to our conflict. At the same time, I don't want to idealize women too much. Women are also capable of being killers. I consider myself non-racist and non-sexist, so I think we all have the potential of being angelic but also monstrous. I think that today, because women are still subject to sexist attitudes, they are agents of change in a positive way. Not because of some sort of DNA composition, but because of the social circumstances. They haven't yet been allowed to achieve their maximum liberty. Maybe the condition of not always being in the most powerful positions has given them a good critical way of looking at things. Women can be good agents of change, but they will have to assume this. It won't be given. It can't be taken for granted.

The car seems to be more than just a means of transportation.

I think that the car can definitely be considered the fourth main character. It imposes a restricted territory. When the three women are in the car, or when two of them are in the car, they cannot be far from each other. Being in the car imposes a physical proximity, so they must relate to one another. They must talk to each other. Even by not talking or not relating, they are still communicating something. In this way, I think the car takes them all on both a concrete voyage and a metaphorical voyage.

For the first time, you shot a film in Jordan.

Not only a first for me, it’s the first Israeli film shot in Jordan in cooperation with the Jordanian Royal Film Commission. There are no cinema treaties between the two countries, but the Jordanians helped make the film shoot possible. They were really cooperative and open, even when I explained that I preferred to shoot a common gas station or the barren free zone instead of tourist’s sites like Petra. There was no intervention in the content and they just went along with what the film needed. Initially, of course, there was a kind of resistance between the Israeli and Jordanian crews, but this melted down after only a few hours and relations became very warm. I think that just the shooting of the film is a good example of how political borders can be crossed. It was really a great experience. 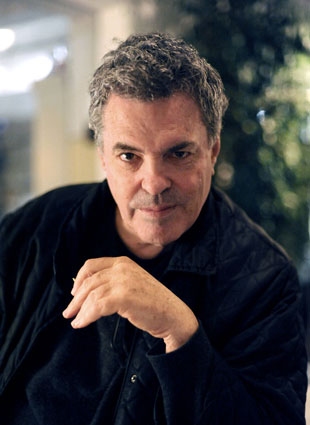