Directed by Curtis Hanson
An enticing drama with real emotional firepower about two estranged sisters and the long, hard road they must take to re-connect with each other.

Jennifer Weiner, author of the 2002 novel In Her Shoes, uses the story to explore the following: "Some of the questions I had when I started writing the book were: How can people who come literally from the same place, who grow up in the same house, go on the same vacations and eat the same food for dinner, wind up being totally different people with different interests, different attitudes, and different looks? What do they still share? What are the bonds that exist no matter where their lives take them? In families with more than one sibling, there is often the feeling of being put into a box: you're the smart, responsible one, while you're the screwed up one we're going to have to keep an eye on. I find it interesting how those labels serve you and how they hold you back."

This enticing drama revolves around two very different sisters who have weathered a rough childhood together and in adulthood have hit a bad patch in their relationship. It is directed with sensitivity and high regard for emotional literacy by Curtis Hanson (L.A. Confidential, Wonder Boys and The Bedroom Window). Maggie (Cameron Diaz) is the ditsy sister with looks and an inability to hold down a respectable job. At a party celebrating her tenth high school reunion, she gets drunk and has to have her sister Rose (Toni Collette) rescue her. A hard-working lawyer from Philadelphia, Rose still has many negative feelings about her body. Although she knows that she can't take too much of Maggie's chaotic lifestyle and slovenliness, she volunteers to let her stay with her until she gets a job.

Maggie blows a possible show biz gig by her inability to read the teleprompter. A job taking care of animals also doesn't pan out. She earns Rose's ire by borrowing her car and having it towed away. But the low point in their relationship comes when she sleeps with a lawyer from the firm whom Rose had been dating.

Both sisters are unwelcome at their father's (Ken Howard) since he has remarried a bitter woman (Candice Azzara) who has no respect for either one of them. Rose and Maggie were raised by their dad after their mother died in an automobile accident. She also was mentally ill and often unable to handle her responsibilities as a parent. Yet both sisters have fond memories of magic moments with her. While at her father's house, Maggie finds some letters from her grandmother who has been mysteriously absent from their lives for years. Kicked out of Rose's apartment, she decides that there is no place else to go than Miami where her grandmother lives.

The screenplay to In Her Shoes by Susannah Grant (Erin Brockovitch) nicely conveys the differences between Maggie and Rose and the reasons why they have so much difficulty with each other. Maggie has suffered all her life as the dumb one and it is only when she lands a job in Florida at an assisted living center that an old blind professor (Norman Lloyd) tells her that she is dyslexic. Reading aloud to him is the first time she gathers confidence in something outside of how sleek and appealing she can look in a bikini. Rose, on the other hand, is the smart one who has become an over-achiever to prove herself to others. When asked why she has so many shoes, she says: "When I feel bad, food makes me fat, but shoes always make me feel good. They always treat me nicely." After being dumped by the lawyer at the office, Rose decides to opt out of the highly competitive fast track and impulsively takes a job as a dog walker. It gives her the freedom she has never had and the chance to build an intimate relationship with Simon Stein (Mark Feurstein), an ex-colleague who introduces her to exotic dining experiences and basketball games.

The person who serves as the catalyst to Maggie and Rose's reunion is their grandmother Ella (Shirley MacLaine). She takes her younger grand-daughter in even after she realizes that all she wants is three-thousand dollars to head back to New York and a new life. Maggie's questions about the past and her mother force Ella to take another look at her own guilt about failing her mentally ill daughter. This multigenerational drama hits high stride in Florida as Maggie's self-absorption begins to melt and her empathy for others takes its place. The closing scenes have real emotional firepower as Ella, Maggie and Rose are brought together. In Her Shoes is an enticing drama about two estranged sisters and the long, hard road they must take to re-discover the love, the intimacy, and the private language they share.

The DVD includes the featurettes "Alternate Opening Title Sequence," "The Casting of Honey Bun," "The Making of In Her Shoes," "A Community For Acting Seniors," and "Inside Look: John Tucker & Just My Luck." 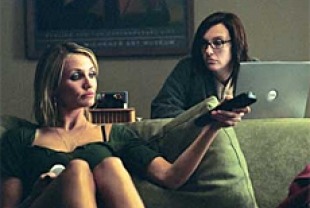 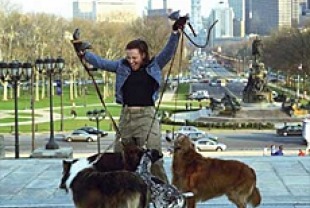 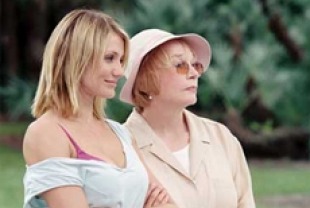