Directed by Gore Verbinski
A quirky but deeply spiritual movie about an awkward and unhappy man whose journey to self-acceptance is riddled with obstacles of his own making.

David Spritz (Nicolas Cage) is a middle-aged Chicago TV weatherman who is not pleased with himself. Instead of operating out of the core of his own being, he has spent most of his time worrying about what others think of him. The results are not uplifting. While on the surface David's job seems very rewarding — he receives a six figure income for working two to three hours a day — he is disheartened because this is not what he thought he would be doing with his life. When the possibility of forecasting the weather for " Hello, America," a New York based national television show comes his way, he views it nothing more than "a shot in the dark."

One of the things that brings him down is constantly comparing himself to his father (Michael Caine) who has been phenomenally successful as a Pulitzer Prize-winning writer. He is convinced that his elderly dad thinks of him as nothing more than an overgrown child. In fact, at one point he says to his troubled son, "easy doesn't enter into grownup life." His father is also troubled by David's vulgar language, which seems to be a sign of his unease with the petty irritations that get the best of him during the course of a normal day.

Another thing that brings him down is the disapproval of his ex-wife Noreen (Hope Davis) who has turned to another man (Michael Rispoli) since she found David impossible to live with. Thanks to an overactive monkey-mind, this weatherman always has a hard time remembering what he is supposed to purchase when he goes shopping. To complicate matters even more, he usually only carries one dollar in his wallet.

And then there is the matter of his two children and the distinct feeling David has that he is an inadequate father. His son Mike (Nicholas Hoult) is in a drug treatment program, and since his dad is never around he seeks companionship with one of his counselors (Gil Burrows) who has other interests than the boy's welfare in mind. David's overweight daughter Shelly (Gemenee de la Pena) is an unhappy teenager who shows no interest in his efforts to bond with her on the archery range or taking her ice-skating.

Gore Verbinski (Pirates of the Caribbean: the Curse of the Black Pearl) has fashioned a quirky movie about a middle-aged man trying come to a small measure of self-acceptance. It will appeal to those who have the patience to deal with the struggles of a socially awkward human being trying to make sense of his life. The emotionally literate screenplay is by Steven Conrad, whose first effort was the immensely affecting Wrestling Ernest Hemingway, a film about aging and the balm of friendship in the last stages of life.

This psychological drama would not have worked if David were a whiner or a victim, and he's not. He's just a guy always trying to do the right thing who usually screws up. Two telling scenes are illustrative of what we mean. In the first, David is visiting with Noreen at their house. After another tug of war with her, he playfully picks up some snow and throws a snowball at her. Instead of gently hitting her on the back, it smashes into her glasses and really hurts and angers her. So much for a spontaneous attempt to get her attention. In another scene, he takes Shelly ice-skating, and they wind up participating in a three-legged bag race. They fall down on the ice, and although she says her leg hurts and doesn't want to finish the race, David insists that they do. He wants to teach her the importance of finishing what you start no matter how things turn out. But the result of the experience is that Shelly's leg is injured and he again looks irresponsible to Noreen.

But perhaps the thing that brings him down the most is when "fans" throw fast foods and drinks at him on the street. He knows it's because they are irritated at his TV persona, but it bothers him that they would never do this to a serious writer like his father. The more he ponders the whys and the wherefores behind this burden he must bear, the angrier he gets and at last concludes that the reason they throw things they don’t want at him is that they view him as nothing more than a clown.

Something fresh is born in David when he starts to seriously practice archery. It is a discipline of concentration that he sorely needs given his scattered mind. It also teaches him to be fully immersed in what he is doing. Emotions, worries and anticipations are outside the central point: mastery of form brings mastery of mind. What he learns with the bow and arrow leads to a new way of being that no longer depends on what others think.

To stay with David on his journey takes patience, but the changes that take place in him are salutary and edifying enough to justify the wait. 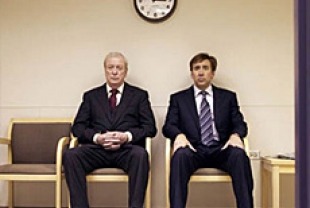 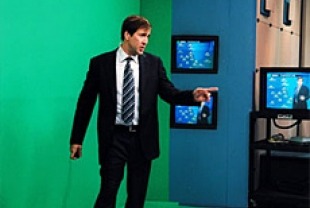 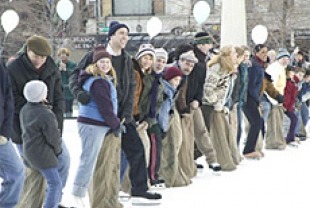 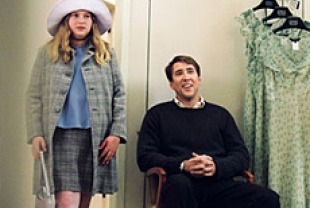 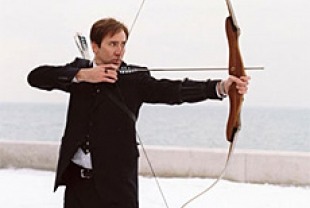