Harry Potter and the Goblet of Fire

Directed by Mike Newell
All about how Harry completes three difficult challenges and deals with the rollercoaster ride of adolescent emotions and energies.

Oh, the challenges and humiliations of adolescence! They are a heavy burden even for the kids at Hogwarts School of Witchcraft and Wizardry! Harry (Daniel Radcliffe) has a troubling dream which shakes him to the core. But he has no time to concentrate on what it might mean because he is going to attend the Quidditch World Cup with his buddies Ron (Rupert Grint) and Hermione (Emma Watson). But after the thrills of watching the games, Harry and the others must run for their lives when The Death Eaters appear and wreck the camp. They have not been seen since the night Lord Voldemort (Ralph Fiennes) murdered Harry's parents thirteen years ago.

Back at school, everyone is all atwitter over the announcement by headmaster Dumbledore (Michael Gambon) that Hogwarts will be hosting the Triwizard Tournament. One person will be chosen to compete in this magical competition from three different schools. For the winner who comes out ahead after three dangerous tasks, "eternal glory" is the prize.

There is a stir of excitement when the pretty girls from the French Beauxbatons Academy arrive, and then the muscular lads from Bulgaria's Durmstrang Institute march in. Those interested in competing are invited to put their names in the Goblet of Fire. The Ministry of Magic official, Barty Crouch (Roger Lloyd Pack), is on hand when the Goblet of Fire spits out the names of the three finalists. They are Viktor Krum (Stanislav Ianevski) from Bulgaria, Fleur Delacour (Clemence Poesy) from France, and Cedric Diggory (Robert Pattinson) from Hogwarts. Then, much to everyone's surprise, the magical Goblet of Fire designates a fourth competitor — Harry Potter. No one is more surprised than he is, since he didn't submit his name for the competition.

Journalist Rita Skeeter (Miranda Richardson) shows up and does an up-close and personal interview with the young wizard. She capitalizes on the envy sweeping over the school about a 14 year old competing — the rules state that to compete you must be at least 17. Even Ron goes into a sulk over what he sees as his best friend's need to always be the center of attention. Dumbledore suspects some strange things are afoot, and asks Alastor "Mad-Eye" Moody (Brendan Gleeson), the new Defense Against the Dark Arts professor, to keep watch over Harry.

Director Mike Newell (Enchanted April, Four Weddings and a Funeral) and screenwriter Steve Kloves do a fine job depicting the adolescent emotions and energies that animate Harry, Ron, and Hermione. All three are thrown off balance by the Yule Ball, a holiday dance. Harry wants to go with Cho Chang (Katie Leung) but when he finally gets the courage to ask her, she politely declines, saying that she is already attending with another boy. Ron worries that no one will ask Hermione but he is stunned to find out that she is going with Viktor Krum.
Harry gets a little help from his friends when the Triwizard competitions begin. In the first challenge, he has to escape from the clutches of a fire-spitting dragon, and in the second, he plunges underwater for an hour. The last test is the most difficult: seeking the tournament trophy in a maze, knowing that along the path you will have to confront your worst nightmare.

These sequences are impressive not because Harry performs them particularly well, but because he again shows himself to be a person who puts others ahead of himself. And all this takes place while he is beginning to deal with the stirrings of adolescent emotions that Hermione rightly predicts at the end will "change everything." Harry Potter and the Goblet of Fire, the fourth installment in the series by J.K. Rowling, could be subtitled "the young wizard's rite of passage." 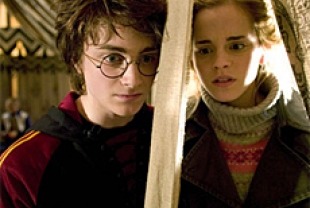 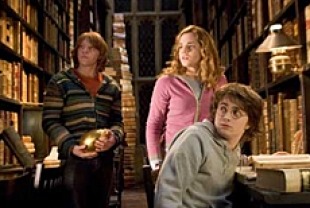 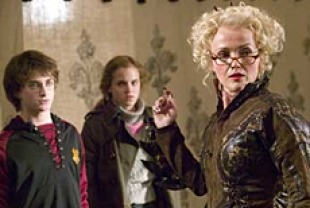 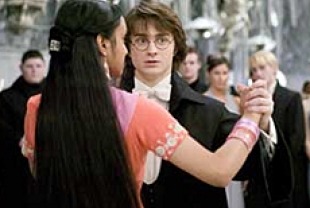