Directed by Robert Greenwald
A searing expose of the greed and systemic poor treatment of its workers by the largest corporation in the world.

Hats off to Robert Greenwald for making this documentary as a teaching tool for progressive groups around the country who want to do their part in stemming the tide of corporate greed and the shameful treatment of working-class men and women. Hopefully the film will reach others as well with its case against Wal-Mart, the largest corporation in the world.

The evidence against the company is overwhelming, but instead of trying to rectify the situation Wal-Mart has established a "war room" staffed by their own experts and spin-doctors. Greenwald charts Wal-Mart's systematic abuse of its workers beginning with low wages: it employees (nearly 600,000 men and women in the United States) earn nine dollars and seventy cents an hour, making their average annual income seventeen thousand dollars. And if that isn’t bad enough, former Wal-Mart managers talk about the practice of cheating workers by forcing them to work extra without pay or deleting time from their timecards.

Abroad things are much worse: workers in China put in eleven hours a day and are paid $3. They are offered dormitory housing for which they are required to pay rent and utilities. In Bangladesh, workers are paid $0.18 per hour for fourteen hour days for garments that sell abroad for $14.96

Greenwald has found many former employees from Wal-Mart who tell of widespread abuses. Several individuals talk about not being able to afford health care plans offered to them, and being told by their managers to sign up for Medicaid or other government assisted programs instead. The end result of this is a cost to taxpayers of over a billion dollars annually. Accounts of racism and gender discrimination add to the long list of complaints against the corporation. There are also sections on Wal-Mart's environmental abuses, its use of undocumented workers to clean its stores, its failure to protect customers in the parking lot where rapes and murders have taken place, and its vicious and focused anti-union activities.

The adverse impact of Wal-Mart on local businesses comes across loud and clear in the accounts of various families who were forced to close down their stores since they could not compete with the giant retailer. They also complain about the unfair advantage given Wal-Mart by state and local governments eager to have the big company in their community. This adds up to millions of dollars in subsidies given to the superstore in exchange for the economic boost that is envisioned for the town or suburb.

The documentary ends with several communities that launched successful campaigns to keep Wal-Mart out. The message is clear: the superstore must clean up its act and people of good will must work together to make this happen.

Wal-Mart: The High Cost of Low Price contains a smorgasbord of special features including a condensed twenty minute version of the documentary, commentary by director Robert Greenwald on the superstore's "culture of fear," and four special videos along with a three minute montage of sermons by various leaders on the superstore's immoral business practices. 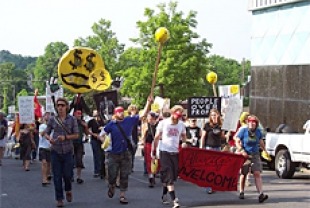