Directed by Jonathan Demme
A rousing trip down memory lane by Neil Young in concert in Nashville.

Learning that he needed surgery to fix a life-threatening brain aneurysm, Neil Young focused his creative energies on the album Prairie Winds. When the operation was a success, the 59-year-old singer/songwriter headed off to Nashville to present a two-night concert in the legendary Ryman Auditorium, which is noted for its excellent acoustics. Young gathered around him some favorite musicians he'd played with before, including Ben Keith, Spooner Oldham, Rick Rosas, Karl Himmel, Chad Cromwell, Grant Boatwright, and Larry Cragg. Enthusiastic backup singers included Young's wife Pegi, Emmylou Harris, Diana DeWitt, Gary Pigg, and Anthony Crawford. Wayne Jackson of the Memphis Horns, The Fisk University Jubilee Singers, and the 12-Piece Nashville String Machine were special guests.

Director Jonathan Demme has done a fine job conveying the emotional dynamics of this concert in this documentary. Young reminisces about the past, laments losses, and pays respect to the family members and friends who have carried him through hard times. Prairie Wind completes a trilogy of albums begun with Harvest (1972) and Harvest Moon (1992). As usual, there are plenty of the melodic gems so characteristic of Young's folk-rock music. Some of our favorites include "Prairie Wind" (about his father), "Falling Off the Face of the Earth" (about the brevity and impermanence of life), "The Painter" (about the past), and "Here For You" (a love song to his 21-year-old daughter). In "When God Made Me," Young asks some poignant questions and concludes with the line: "Did he give me the voice of compassion to help my fellow man?" There are also frolicsome renditions of "Old Man" and "Heart of Gold," two long popular Neil Young ballads.

But the standout selection from the new material is "This Old Guitar." Young notes that his acoustic guitar was once owned by Hank Williams. He sings of his trusty six-stringed friend:

This old guitar ain't mine to keep
Just taking care of it now
It's been around for years and years
Just waiting in its old case
It's been up and down the country roads
It's brought a tear and a smile
It's seen its share of dreams and hopes
And never went out of style
The more I play it, the better it sounds
It cries when I leave it alone
Silently it waits for me
Or someone else, I suppose . . .

This old guitar ain't mine to keep
It's mine to play for a while.

Reading these lyrics, we see Young's spiritual perception of his instrument as something more than wood and strings.

Old and new fans alike will be enthralled by this concert. There are many mansions in the music of this talented singer and songwriter, and this documentary opens the door to many of them.

Special DVD features include a bonus song: "He Was the King"; rehearsal diaries, narrated by director Jonathan Demme; six in-depth featurettes: Fellow Travelers, Cruising with Neil, These Old Guitars, Cruising With the Players, Finishing Touches, Warming Up With Neil, and the Jubilee Singers; and a blast from the past: 1971 Neil Young performance on the Johnny Cash Show. 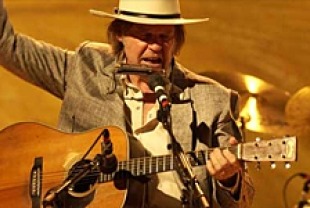 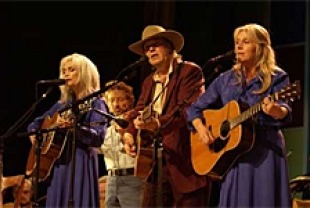