Thank You for Smoking

Directed by Jason Reitman
A snappy satire about smoking, corporate shenanigans, and the spin that keeps everything rolling along in these amoral realms.

Nick Naylor (Aaron Eckhart) is a gifted spin doctor who thinks quick and has a thick skin. He needs these qualities to survive as the media spokesperson for the tobacco industry's Academy of Tobacco Studies. In an appearance on Joan Lunden's talk show, he is introduced as a person who earns his living by killing 1,200 people a day. And yet, he this sharp-witted spokesman manages to make the anti-smoking panelists look like idiots. Nick laughs over the appearance with his two best friends who call themselves the "M.O.D. Squad" for "Merchants of Death." Polly (Maria Bello) works for the alcohol industry, and Bobby Jay (David Koechner) for the firearms industry. When they learn that Nick is going to be interviewed by Heather Holloway (Katie Holmes) from the Washington Probe, they warn him to watch out.

Thank You for Smoking is based on the 1994 novel by Christopher Buckley and has been adapted for the screen and directed by Jason Reitman. The film very cleverly presents Nick's professional amorality. His job is just a way to pay the bills. Actually, many people regard their work the same way, just as how they can accumulate money and power, provided that they work hard enough and play the game well. In this scenario, other people exist to serve their needs and are disposable and interchangeable.

Nick's hard-driving boss (J .K. Simmons) knows that the cigarette industry is fighting a losing battle against all the crusaders against smoking. One visible and powerful opponent is liberal Senator Ortolan Finistirre (William H. Macy) who is lobbying to have a skull-and-crossbones printed on the label of every cigarette pack. When Nick comes up with the brilliant idea of getting movie-makers to back smoking as really cool, The Captain (Robert Duvall), a North Carolina tobacco baron, likes the idea and sends him out to Hollywood. Nick's ex-wife (Kim Dickens) is not very happy when he takes his young son Joey (Cameron Bright) along so they can have some quality time together. They are wowed by a super-agent, Jeff Megall (Rob Lowe), who comes across as a New Age guru and cinematic Svengali. Nick also takes his son on an errand to see the original Marlboro man (Sam Elliott) who is dying of cancer. In both instances, the king of spin comes across as a smooth operator. No wonder he can tell his son, "The beauty of an argument is that if you argue correctly, you're never wrong." Like a true believer, he wants to pass on to Joey his vaulted belief in logic.

Aaron Eckhart delivers a very strong performance as Nick; he's so convincing it's impossible not to like him. In the end, despite a major sea change in his life, he comes out smelling like a rose. In these times, it's hard to keep spin masters down since they're so damn resilient. 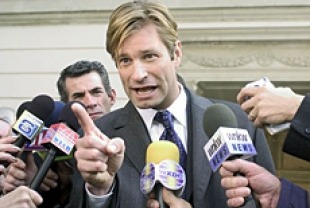 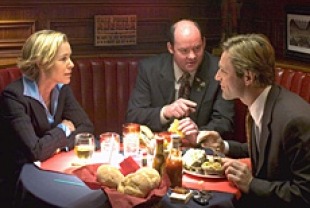