Directed by Richard Glatzer, Wash Westmoreland
A heartfelt drama set in the Los Angeles Latino community about a nurturing eighty-five year old man who takes under his wings two rebels ostracized by their own families.

When a girl turns 15 in the Latino community, a celebration called Quinceanera is held to honor her entry into womanhood. Eileen (Alicia Sixtos), a smiling Mexican-American, has her family and friends for her festive ritual held in Echo Park, Los Angeles. But when her tough cholo brother Carlos (Jesse Garcia) arrives, there is a scuffle. A homosexual, he is a pariah in the community.

The next one due for a Quinceanera is Magdalena (Emily Rios), Eileen's cousin, whose father, a storefront Christian preacher (Jesus Castanos-Chima), has high moral standards. When her mother informs her that the family may not be able to afford the Hummer Limo that Eileen had, she is upset.

Magdalena's boyfriend Herman (J. R. Cruz) has been pushing her to go all the way for quite a while. Since she has refused, they have tried other sexual experiments. So now Magdalena is stunned when she finds out that she is pregnant. Although she tells her parents that she did not have intercourse (which is the truth), they refuse to believe her.

Magdalena moves in with her great-great uncle Tomas (Chalo Gonzalez), an 85-year-old who makes his living selling champurrado (a Mexican hot drink) on the street. Carlos lives with him as well. For 28 years Tomas has rented a back house with a garden and religious shrine. This new family revolves around his love and open-mindedness.

As her pregnancy grows more visible, Magdelena tries to get a commitment out of Herman but his mother has high hopes for him going to college and becoming a doctor. Cut off from her angry father who is convinced that she has brought shame on the family, Magdalena even finds herself ridiculed by her small circle of friends. Carlos works at a local car wash and becomes friendly with Gary (David W. Ross) and James (Jason L. Wood), an affluent gay couple who own the house by Tomas's. They are pioneers in the gentrification of the neighborhood.

Writer and directors Richard Glatzer and Wash Westmoreland have made a soulful film about three rebels who stand together and become a family unit. Chalo Gonzalez puts in a heart-warming performance as Tomas, a nonjudgmental elder turned caretaker for those rejected by their own parents. To Carlos and Magdalena, he's a saint offering them shelter, love, compassion and the wisdom of his years. On the street, he is adored as a man with a smile on his face and some good food and drink. When Carlos returns with bruises from a fight, Tomas is there to offer solace and affirmation that he is okay just the way he is.

Positive portraits of elders who model love, compassion and understanding are few and far between on the screen. Chalo Gonzalez touches our heart with this wonderful performance. Quinceanera was the Grant Prize and Audience Award winner at the 2006 Sundance Film Festival.

Special DVD features include a deleted scene; commentary with the filmmakers and cast; "On the Red Carpet with Quinceanera"; and "The Making of Quinceanera." 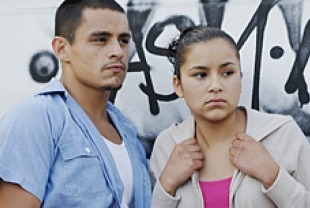