Directed by Amat Escalante
An enigmatic Mexican film that captures the shadow elements in a marriage.

Diego (Cirilo Recio) is a cross-eyed, middle-aged man who works as a doorman in a government building and spends the day counting the persons who pass in front of him. His younger wife Blanca (Laura Saldaña) works in a fast-food sushi bar. They do not have much to say to each other after a hard day's work and so they wile away the hours watching televison. They do have an active sex life with Blanca usually leading the way. One day he arrives home to find her waiting for him nude on the floor with her legs spread wide open.

But the downside of their marriage is her jealousy. When a co-worker's son is kidnapped, Diego walks her home and embraces her in kindness. Blanca finds out about this gesture and explodes in anger. Her apologies usually consist of sexual favors.

When Karina (Claudia Orozco), Diego's daughter from a previous relationship, shows up and wants to stay with them, Blanca refuses and he is forced to set her up in a hotel room. She is trying to end a relationship with an addict who has gotten her into drugs. Karina's inability to deal with the real world puts an incredible amount of pressure on her father in the mysterious last sequence of the film which takes place at a gigantic rubbish dump outside the city.

This enigmatic Mexican film directed by Amat Escalante vividly captures the shadow elements in a marriage. When Diego tries to reach out to his daughter in love, he seems at first to be too late, but he rises to the occasion and musters the inner strength that is lacking in his relationship with Blanca. Throughout the film, which has very little dialogue, it is possible to hear Diego breathing heavily. He does this not only when having sex but also during his valiant effort to do well by his daughter. 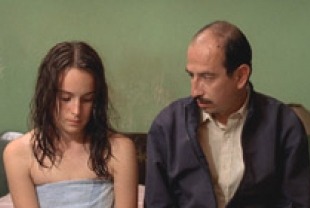