Directed by Robert I. Douglas
The reaction when a pro soccer star in Iceland announces that he's gay.

In this comedy from Iceland, Óttar Thor (Björn Hlynur Haraldsson) is the star player of a pro soccer team. He shocks everyone one day by announcing to a magazine reporter that he's gay. She assures him that his confession has upped the article on him from the last page to the cover.

Thor's prejudiced father (Siguröur Skúlason) is upset because his son's news makes him look bad to his peers. His bigoted brother (Jón Atli Jónason) seems pleased to see all the anger directed at Thor. Both men are not only are homophobes but are unrepentant women-haters as well. Thor's ex-wife (Lilja NóttÞórarinsdóttir), a former Miss Iceland, doesn't know what to make of her husband's announcement. She is an alcoholic who has put herself into a rehab program. Their 13-year-old son (Ammundur Ernst) feels embarrassed by his father especially after he sees him having sex with a man.

Banned from playing with his pro team, Thor joins an amateur team with two other homosexuals. When word gets out about him, more gay players join the squad and the hetero players quit. Soon they are winning matches by forfeit in the amateur league because no one wants to play "the queers." All this leads up to a match against Thor's old team just after a Gay Pride parade.

Homophobia is a universal problem in cultures all over the world, spreading toxins of hatred and separation. Although a very serious subject, it is often approached with comedy. This one is more successful than a lot of television sitcoms have been in conveying the challenge and the rewards of the spiritual practice of openness. 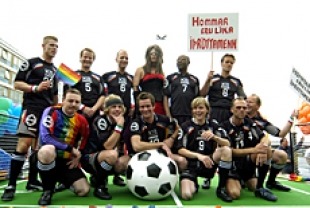