Directed by Bryan Singer
Superman as a lonely savior who in a moment of desperate need must rely on the help of some friends.

Superman has been gone for five years, leaving Lois Lane (Kate Bosworth) in the lurch. Her disappointment in him has manifested in an article "Why the World Doesn't Need Superman" that has won her a Pulitzer Prize. We can only speculate what she wrote. Perhaps she criticized the dependence of ordinary people on Superman's extraordinary powers. Perhaps she pointed out that relying upon a savior to do all the things that need to be done to avert world disaster is irresponsible. Perhaps she got down to the nitty gritty fact that putting Superman on a pedestal does nothing for the cause of world peace but simply enables people to relax and let him do all the work. Perhaps she cautioned about golden projections, our tendency to attribute to superheroes and celebrities the qualities we are afraid to embrace in ourselves.

The screenplay by Michael Dougherty and Dan Harris does not fill in the spaces here but thinking about what Lois wrote adds greatly to the meaning we derive from Superman Returns.

The Man of Steel has been on a space journey but has had no luck finding his home planet. So he zips back to the farm where he was raised by his foster mom, Martha Kent (Eva Marie Saint). Standing at a fence and gazing into the fields, he recalls the exhilaration and joy he felt as a boy when he discovered his power to fly. Then he returns to his old job at the Daily Planet, thanks to the kindness of editor Perry White (Frank Langella). Much to his shock, Clark learns that Lois (Kate Bosworth) has a fiancé, Richard White (James Marsden), the editor's nephew, and a son Jason (Tristan Leabu). But before he can collect his feelings, he must rescue her and a group of reporters aboard a jet that is plummeting to the earth after a mishap with the space shuttle launching from its back.

Superman laments the changes in Lois's life and even flies over to her house where he uses his vision and hearing powers to eavesdrop on the family inside. He knows, of course, that he is an outsider, something his father told him long ago, but he can still long for what these humans have. He decides to do what he does best: save people all over the world who are in jeopardy situations. Soon the papers are screaming headlines about Superman's return. Finding Lois on the roof of the Daily Planet, he gives her a scoop interview, then takes her on a romantic night-time flight over the city and into space to give her a taste of what he experiences. Back in the office, her son Jason seems to be the only one to make the connection between Clark Kent and Superman.

Bryan Singer, who previously worked on the X-Men films, directs this superhero spectacular. He toys with religious images throughout. In several scenes Superman hangs in the sky, arms outstretched, looking like Jesus on a cross. There is also talk of the oneness of the Father and the Son. In a key scene, Superman challenges Lois on her award-winning article: "You wrote that the world doesn't need a savior, but everyday I hear people crying out for one."

Brandon Routh conveys Superman's vulnerabilities and also his feelings of deep isolation. Kevin Spacey appears as Lex Luthor, a power-hungry man who has a deep hatred of Superman and a plan to bring great harm to him as well as great profit to himself as a global entrepreneur of prime real estate. Parker Posey is a hoot as this villain's ditsy companion, Kitty Kowalski. In one of the best sequences, Lois, her fiancé, and her son come to the rescue of Superman, pointing out that even those with phenomenal powers occasionally need help from their friends. Also adding to the rich emotional textures of the drama is the repeated use of composer John Williams' Superman theme. 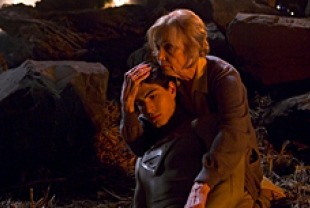 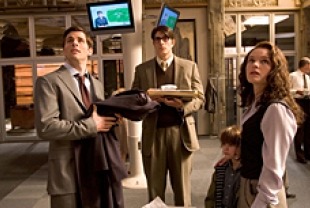 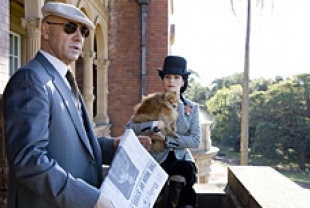 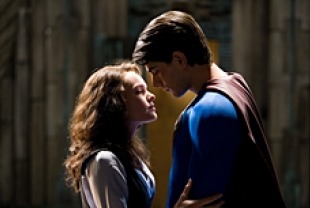 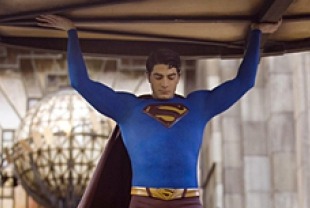