Riding Alone for Thousands of Miles

Directed by Zhang Yimou
A heart-affecting Chinese film about an elderly man's journey of love that becomes a path of awakening for him.

Many fathers and sons don't really cherish or nurture the love connection. Men are often too busy with their careers and off doing their own thing. Boys, feeling they aren't good enough, struggle to prove themselves to their fathers. Father-son rifts can grow into seemingly irreparable separations that lead to great pain and suffering on both sides. That is the case in Riding Alone for Thousands of Miles, a heart-affecting film by Chinese director Zhang Yimou who has two other fine intimate dramas to his credit: Not One Less, about a determined young schoolteacher; and The Road Home, a spellbinding tale of romantic love. Here an elderly father who has not spoken with his estranged son for ten years decides to make the first move toward reconciliation.

Gou-ichi Takata (Ken Takakura) is a taciturn widower who lives in a Japanese fishing village. He receives a call from Rie (Shinobu Terajima), his daughter-in-law, informing him that his son Ken-ichi has been hospitalized, and she is waiting for a diagnosis of his ailment. Gou-ichi takes the train to Tokyo but is surprised when he hears his son tell Rie that he doesn't want to see him. She apologizes for her husband saying that he really didn't mean what he said. She gives him a videotape which might provide a glimpse into Ken-ichi's life and work.

Back at his home, Gou-ichi looks at the tape, which was shot in the southern Chinese province of Yunnan where his son was working on a research project on the Chinese folk arts. Ken-ichi is unable to convince Li Jiamin (Li Jiamin) to sing a selection about friendship from the opera Riding Alone for Thousands of Miles. Ken-ichi has to go back home not having fulfilled this goal. His father comes up with a wild idea that proves his deep and genuine feelings for his bed-ridden son: he will travel to China and film Li's performance as a gift for Ken-ichi.

All kinds of challenges face Gou-ichi on his adventure in China. Since he does not speak the language, Jasmine (Jiang Wen), a patient and helpful interpreter leads him to Li's village. There he learns from Lingo (Qiu Lin) that the singer has been sent to prison for three years for assaulting a man. He suggests finding another singer to perform the piece since it is done by a person wearing a mask, but Gou-ichi insists that it must be Li. He wants to visit him in jail and see if he can film the performance there. On his journey, this stubborn old man comes to regret that over the years he has not related well to other people and certainly has not been able to express his emotions. This still holds true and is especially clear when Rie calls and tells him that his son is dying of liver cancer. He is unable to speak from his heart to her.

Gou-ichi manages to convince a band of bureaucrats that he wants to film Li in the prison as a tribute to his dying son. But when Li learns of Gou-ichi's plight, he breaks down and is unable to perform. It turns out that he has an illegitimate son named Yang (Yang Zhenbo) whom he has not seen for eight years. Gou-ichi decides to visit the village where the boy lives and bring the two of them together for a reunion.

Zhang's direction of this character-driven drama is nicely paced with just the right mixture of endearing characters, environments, and surprises. The movie beautifully conveys the many ways in which Gou-ichi opens his heart to love. He begins to see how much he and his son have in common as lonely and stoic individuals unable to express their true feelings. He becomes more forgiving, kind, and playful. Again and again, he realizes how beholden he is to others for assisting him on his journey, such as Jasmine, Lingo, and chief of Yang's village.

Ken Takakura gives a tour de force performance as the tight-lipped father whose odyssey of love becomes a path of awakening for him. He empathizes with others, appreciates the ways in which people share what they have, and begins to see that forgiveness is a miracle that comes slowly. Riding Alone for Thousands of Miles shows that it is never too late to let love open your heart.

Special DVD features include The Making of Riding Alone for Thousands of Miles. 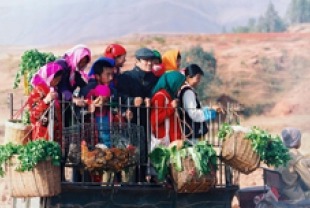 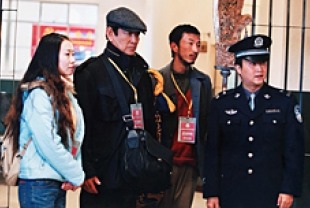 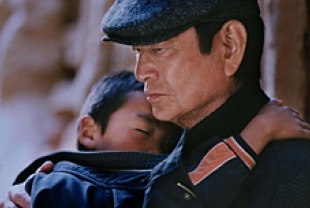