Directed by Todd Field
One of the most original and nuanced suburban dramas ever to grace the screen about the complexity and intensity of yearning.

Sarah (Kate Winslet) is a suburban mom who doesn't feel comfortable in the role of raising her little daughter Lucy (Sadie Goldstein). She has a master's in English literature and lives in a large house with her husband Richard (Gregg Edelman), who works in advertising. Each day she goes to the park with her daughter and listens to the gossip and small talk of her neighbors. One of them excitedly shares her enthusiasm about a spa treatment she found to be "an intense spiritual experience." Mary (Mary B. McCann), the most outspoken of their number has organized her life on a rigid schedule.

Sarah perks up when they all pause to gaze at Brad (Patrick Wilson), a handsome stay-at-home dad they have labeled "the Prom King." None of them has spoken to him but they are all enamored of his appearance and mystery. When Lucy wants to swing next to his son Aaron (Ty Simpson), Sarah begins talking to Brad and just to shock her neighbors, kisses him. The women are stunned and the kids mystified as to what has just happened in front of them.

This deliciously dramatic and nuanced opening sequence sets the stage for what has to be one of the most original and engaging suburban dramas to grace the screen in many a moon. The director is Todd Field who made In the Bedroom. He has co-written the screenplay with Tom Perrotta, the author of the well-received novel of the same title. The tranquility of this suburban neighborhood has been shattered by the release of 48-year-old Ronnie McCorvey (Jackie Earle Haley), a sex offender who served two years in prison. He lives with his mother (Phyllis Somerville) who looks after him and has a large collection of clocks. The parents in the community are outraged that this man is free; many state that he should have been castrated. Larry Hedges (Noah Emmerich), an ex-cop, is particularly angry about having this pervert on the streets and has posted flyers about getting rid of him. He harasses Ronnie and his mother whenever he gets the chance.

In one of the many fascinating scenes in the film, Sarah is invited to a book discussion group on Madame Bovary. She defends the protagonist's adulterous behavior as a feminist impulse and as a declaration of independence from a dull and stultified existence. Mary, ever the negative person, declares that Madame Bovary is nothing more than a slut and having sex with others outside the bonds of marriage is simply unethical. Although Ronnie's yearnings cause him more trouble when he goes on date with a young woman, they are the same hungers that drive Brad and Sarah and her husband. Yearning is a slow burning fire that can light up our lives when it is properly nurtured. But the shadow side of yearning can lead to behavior that is destructive to ourselves and hurtful to others.

Field and Perrotta explore this turf and more in Little Children. Here is a film that tutors us in the art of befriending our desires so we can move beyond our lesser appetites to something that truly approaches love and compassion. 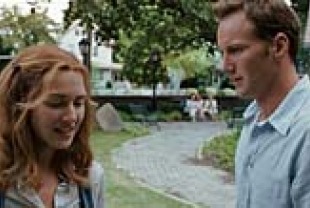