Directed by Rick Rosenthal
A fine coming-of-age drama about a sexually eager young man who discovers that anything is possible with a friend who is loving and trustworthy after years of giving and forgiving.

Seventeen-year-old Henry Nearing (Gregory Smith) lives with his father, Shep (David Morse), in a house that seems too big for just the two of them. Rose, the energy source in the place, died six months ago and neither her husband nor her son has come to terms with her death. Brother Blair (David Moscow) has escaped to Florida with his girlfriend.

The one shining light in Henry's life is Merna (Ashley Johnson), his best friend since childhood who sees sides of him that nobody else knows. When she suggests quite seriously that they experiment sexually with the Kama Sutra, he does not take her up on her proposition. They are both still virgins, and she wants to have intercourse with a friend that she trusts. Henry doesn't know what he wants. He is just drifting through his days in a fog.

At school, he becomes obsessed with Grace (Jordana Brewster), a foxy and flirtatious young woman who is dating Lance (Chad Faust), the school's lacrosse champ. She notices Henry's attraction to her just when she decides to play around a bit behind her boyfriend's back. Henry and Grace have sex and then on another date spend an evening they both will always remember thanks to a run home in the pouring rain dressed only in one blanket.

But all the adventure and physical pleasure does not take away Henry's malaise. So he drops out of school one month short of graduation and retreats to the basement, telling his dad he's not coming up until he discovers the meaning of life.

Nearing Grace is directed by Rick Rosenthal with a screenplay by Jacob Aaron Estes based on a novel by Scott Sommer. This coming-of-age drama clicks thanks to the fine and fresh performance by Gregory Smith. He makes Henry into a credible character — a young man whose dream is to rise above everything in his life and float free of all entanglements. He has trouble with what he sees as his father's regression into adolescence: riding a motorcycle, drinking himself into a stupor, and moping around the house. His brother Blair is no role model either; he returns home, only to tent out in the front yard, eschewing all responsibility.

The only one who doesn't disappoint Henry is dependable Merna who seems like a sexy saint once he sees the dark side of Grace's selfishness and self-destructiveness. The moral of the story is that anything is possible with a friend who is loving and trustworthy after years of giving and forgiving. 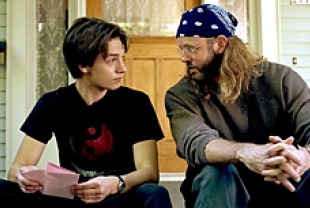 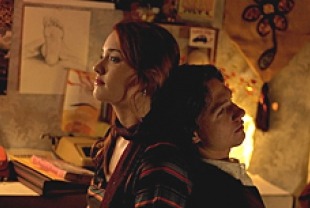