Directed by Tom Shadyac
The true story of a medical student who breaks the rules by daring to proclaim that the best medicine is love, laughter, and play.

This inspiring drama directed by Tom Shadyac is based on the book Gesundheit: Good Health Is a Laughing Matter by Hunter Doherty Adams with Maureen Mylander. It presents the true story of a Virginia medical student who breaks all the rules by daring to proclaim that the best medicine for patients is listening, love, compassion, laughter, and play. This exuberant and enthusiastic character, more than any other screen hero in 1998, demonstrates the spiritual practice of zeal — being aroused by life.

During a brief stay in a mental hospital, Patch Adams (Robin Williams) learns that empathy and creativity are two of the keys to healing others. Another is being able to see the "whole world anew each day." Believing that he is called to bring this revolutionary message to the medical establishment, he enrolls at Virginia Medical University. Adams's approach of seeking "to treat the patient as well as the disease" is viewed as anathema by Dean Walcott (Bob Gunton), a tyrannical believer in scientific objectivity.

Eager to test his new theories, Adams begins interacting with patients at the university hospital, even though students are not supposed to see patients until their third year of schooling. Donning a clown's nose and other whimsical disguises, he brings fun and laughter into the children's ward and surprises into the dull routines of older patients. He even manages to reach a terminally ill cancer patient (Peter Coyote) who is terrified of death. The head nurse (Irma P. Hall) believes in what he is doing and works along with him.

Dean Walcott, however, is not impressed; he is not even amused. He wants to have Adams expelled, even though this rebel with a cause turns out to be the best student in the class. Meanwhile, Patch convinces Carin (Monica Potter) and Truman (Daniel London) to join him in the establishment of a free clinic where they can practice the powerful medicine of alternative healing based on love. Even in the face of tragedy, Adams proves to be a resilient idealist. "You treat a disease," he argues, "you win or lose. You treat a person, and you always win."

Since 1971, the Gesundheit Institute has provided 15,000 people with free medical care and the healing balm of friendship. Patch Adams has said: "The most revolutionary act one can commit in our world is to be happy." Speaking right to the heart, this movie raises up joy as a way of life and passion as a foundational element in zeal. 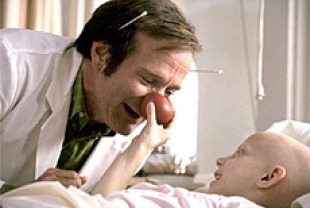