Directed by Brad Silberling
A funny and inspiring film about two strangers who connect in a way that surprises both of them and enriches their lives.

All of us are composing our lives as we go along. We never know what is going to happen next, so we do the best we can, no matter what the circumstances. One of our first impulses in a world of apparent randomness is to try to control things. But usually the harder we push against what is happening to us, the worse it gets.

In this light-hearted and feel-good independent film written and directed by Brad Silberling, a gregarious African-American actor connects with a harassed and angry Hispanic grocery store clerk, and these two strangers spend the day together in a spontaneous adventure that surprises both of them and enriches their lives. An endearing message of this brief but poignant movie is that living an improvised life is the way to go.

A Los Angeles actor (Morgan Freeman), who hasn't done a movie in four years, is trying to decide whether or not to take a role in a low-budget drama in which he would play a store manager. He is being driven to Archie's Ranch Market in Carson by a young man who knows the actor's work and tells him a bit about the movie and its inexperienced director. At the store, the actor wants to do some personal research on the role to see if he wants to take it on.

The place, which has an Hispanic clientele, is practically empty, and the store manager is not even there. One lazy clerk is painting her toenails; some kids play with toys in an aisle. The actor is immediately drawn to Scarlet (Paz Vega), the checker in the "10 Items or Less" line who has mastered the art of adding up the groceries without taking them out of the shopping basket. This makes the whole procedure very swift and painless for customers in a rush. The actor makes her nervous by standing close to her, but he can't wait to sing her praises by commending her efficiency and mastery of the job. Scarlet is not used to being appreciated.

When the actor tells Scarlet that the young man who drove him to the store has not showed up, she can't believe that he has no other way to get home to Brentwood. She is very aware of the class differences between them and doesn't want him to get hurt in this rough neighborhood. She volunteers to drive him home but first she has to stop and pick up her car from her estranged husband. He is the missing store manager (Bobby Cannavle), and he's living with Lorraine (Anne Dudek), the previously mentioned inept clerk. Scarlet attacks her husband and vents her anger on both of them by crashing into their car and leaving.

The actor realizes that he is in the presence of a very emotional woman whose life is not going very well. When he discovers that she is on her way to interview for a secretarial job with a construction company, he perks up and realizes that his skills can help her. After all, an interview is no different from an audition. He takes her to a store for wardrobe (a new blouse) and makeup, then gets the car washed so she can make a good entrance. He then coaches her through the interview process.

10 Items or Less is a total delight from start to finish. This two-character drama fleshes out the actor and the store clerk as they face one challenge after another. They improvise their time together, and neither one feels compelled to make it last. Morgan Freeman is charming as the people person who flirts with women of all ages and thoroughly enjoys observing the mannerisms of everybody he meets. Paz Vega is fiery and frazzled as the Spanish immigrant who has a low opinion of herself yet is willing to take a leap in the dark to improve herself.

Seeing a charming and engaging film like this one by Brad Silberling gives us hope that more directors will try their hand at intimate character-driven dramas. Of course, the studio system works against this kind of movie, and independent filmmakers such as John Sayles have produced outstanding work over the years only to find it hard to raise money to continue in this approach. This is one of our favorite films of the year along with Looking for Kitty directed by Edward Burns. Both are small masterpieces.

Special DVD features include a commentary by director Brad Silberling, "The Making of" featurette, a photo gallery, and a surprise bonus. 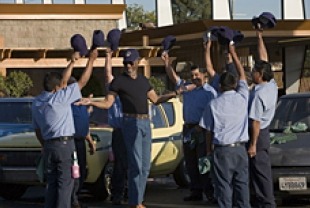 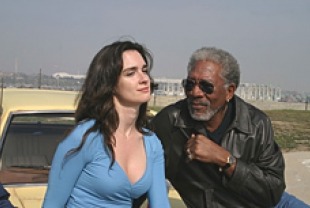