The Secret Life of Words

Directed by Isabel Coixet
A compelling drama about a traumatized young woman who keeps to herself and finds a way out of silence by sharing her secret with someone who cares.

Hanna (Sarah Polley) is a partially deaf woman who works at a factory and keeps to herself. She has been there four years without any break. This makes her co-workers quite nervous. Each day she eats alone — the same meal consisting of chicken, rice, and an apple. When things overwhelm her, she shuts off her hearing aid and savors the silence. One day her boss calls her into his office and tells her that she must take a vacation. Although uneasy with this change in her rigid life, Hanna decides to go to a coastal town in northern Ireland. While there, she overhears a man taking about the need for a nurse on an oil rig to treat a man with burns. Hanna has worked as a nurse and so she is immediately hired.

At first, the rig seems the perfect place for a person who keeps to herself. Dimitri (Sverre Anker Ousdal) shares her love of solitude and notes that one can spend plenty of time alone there. Hanna is quite intrigued with Martin (Daniel Mays), an introverted scientist who measures the waves that strike the rig. But his real interest lies in doing something to save the mussels that are being damaged by the dirty water. Two other men on the rig seem to share a secret passion for each other. The most gregarious person is Simon (Javier Camara), the Spanish cook who serves up haute cuisine for the unappreciative crew.

Hanna uses silence as an armor to protect herself around people. She is especially quiet in the presence of Josef (Tim Robbins), the man with burns on his body from a fire that also scarred his eyes. The doctor has told him that he will not be able to see anything for a few weeks. Hanna refuses to tell Josef her name or the color of her hair. When he playfully suggests that he'd like to call her "Cora," she agrees. Josef is a flirt, a pattern that has damaged his relationship with his closest friend. He has a secret but is not willing to share it with Hanna until she opens up to him. Her secret is even more shocking, and it takes her a long time to trust him enough to speak the words.

The Secret Life of Words is written and directed by Isabel Coixet whose previous movie My Life Without Me also starred Sarah Polley. The director has stated in an interview:

"Hanna lives in silence that her deafness imposes on her, although very often it seems that silence is the only weapon she has to defend herself from the world. Josef talks as if it is only through words and a self-deprecating sense of humor that he can avoid going completely mad. The encounter between them, the inevitable physical link that is established between a nurse and the patient she is caring for, will show them the other face of the reality in which both of them are immersed. The empathy, that mysterious ability to feel the other person's dilemmas as your own, that they manage to develop will break down all the walls of silence and cynicism."

Sarah Polley gives an astonishing performance of a young woman whose secret has forced her to hide out in silence. She is actually shrouded in shame, that dark emotion that makes someone feel guilty for even existing at all. In this powerful drama, Hanna is emboldened to move beyond shame and the separation it has caused in her life. Julie Christie appears as a counselor who has worked with her in the past. 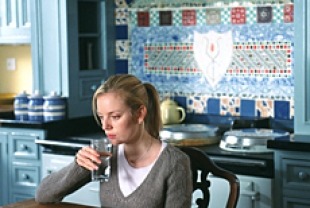 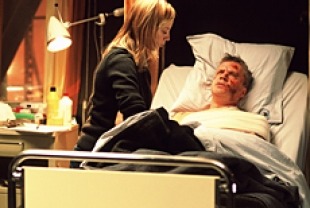