Directed by Adrienne Shelly
A romantic comedy that draws us into the intimate lives of rural folk as they struggle to find their small share of happiness.

At one point or another in our lives, we get stuck. No matter what we do, we can't seem to push or pull ourselves ahead. Our wheels spin and spin while we fret and grow ever more anxious. It is so hard to change. Think about all the effort and determination it takes to change one small but deeply entrenched habit. We fear transformation, the moment when our hands are empty. Because changes are so difficult to achieve, when they do happen, they seem like miracles. That is certainly the case in Waitress, a small and intimate romantic comedy set in a small Southern town about a married woman who is overwhelmed by unhappiness and a deep feeling that she's destined only for more disappointment. The film was written and directed by the late Adrienne Shelly.

Jenna (Keri Russell) is married to Earl (Jeremy Sisto), a manipulative, jealous, and cruel tyrant who reigns over her life like a bad nightmare. Fortunately, she has some great friends. She works at Joe's Diner with brassy Becky (Cheryl Hines) and mousy Dawn (Adrienne Shelly) who do what they can to cheer her up each day. None of them is very happy: Becky is married to a "senile invalid," and Dawn is lonely until she meets a man (Eddie Jemison) who is so spellbound by her that he composes spontaneous poems to her on the spot. Cal (Lew Temple), the manager of the diner, is a disciplinarian who always yells at the waitresses. Things go from bad to worse when Jenna learns that the night Earl got her drunk with him, she also got pregnant.

The saving grace in her life is her ability to make sensational pies. Her mother passed on this gift to her when she was very young, and every day she comes up with new recipes to match her moods. For example, the day she discovers herself to be pregnant, she bakes an "I Don't Want Earl's Baby" Pie — a quiche of egg and cheese with a smoked ham center. Since neither of the other waitresses can handle Joe (Andy Griffith), the cantankerous owner of the diner, Jenna takes his imperious and complicated orders and listens to his readings of horoscopes from a local newspaper. He is a big fan of her pies and one day tells her:

"Just a pie! It's downright expert. A thing'a beauty . . . how each flavor opens itself, one by one, like a chapter in a book. First, the flavor of an exotic spice hits ya . . . Just a hint of it . . . and then you get flooded with the chocolate, dark and bittersweet like an old love affair."

Jenna dreams of escaping from Earl and winning $25,000 at a pie contest, but he won't let her go. She frets about the baby that she doesn't want even though Becky and Dawn give her a special book with a space where she can write letters to her unborn child. Jenna tries and it proves therapeutic for her. But the biggest surprise comes when she meets and falls in love with Dr. Pomatter (Nathan Fillon), the new OB-GYN in town, a married man from Connecticut whose wife is serving a residency at a hospital in the community. He sees her true inner beauty and is a huge fan of her "awesome" pies. No wonder that during one of their most romantic afternoons together, Jenna teaches him to make pies and even sings to him a very special song her mother taught her while baking them.

Waitress is a romantic comedy that draws us into the intimate lives of these characters as they struggle to find their small share of happiness. Keri Russell gives the best performance of her screen career as the immensely gifted pie-maker and incredibly depressed pregnant wife. After coming up with one escape plan after another, the miracle that propels her into change comes out of the blue and is just perfect. Similar in spirit to Little Miss Sunshine, this movie will steal your heart and send you on your way rejoicing. Which is exactly what romantic comedies should do! 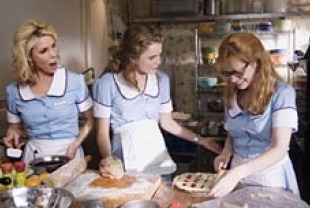 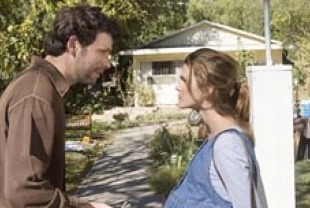 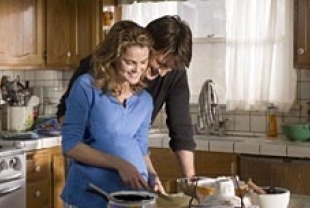