Directed by Michael Moore
A blistering documentary designed to spur reform for a new system of universal health care.

Michael Moore continues his examination of the egregious flaws and foibles of American society with this blistering look at our health care system. He uses a mix of humor and personal narratives to make his points as he did with the Oscar-winning Bowling for Columbine and the all-time box-office documentary champ Fahrenheit 9/11.

Moore traces the genesis of the present day health care crisis that has 47 million citizens uninsured to an archival audio recording in February 1971 on which President Nixon affirms Edgar Kaiser and his system of using incentives for less medical care. The next day, he announces the Health Maintenance Organization (HMO) system which has led to the wild success of for-profit medicine and the catastrophic failure of the system to care for the general public and especially the poor. The United States presently ranks 38th in the world just above Slovenia in health care.

In preparation for Sicko, Moore sent out requests for personal stories about how people's lives have been affected by the health care system; he received over 25,000 replies. We can all relate to these horrific accounts because most of us know people who have experienced the same things. Take the story of the uninsured carpenter who had to make a decision which finger to reattach since he could not afford to do both. Or the story of a middle-class couple who had to move in with their daughter because of their medical bills, even though they had insurance. Or the account of a hospital worker whose husband needed a bone marrow transplant but was denied coverage by the insurance company since they deemed the treatment as "experimental"; he died shortly afterwards. Moore also probes the dumping of poverty stricken patients on skid row in Los Angeles. If you can't pay for care, you are out on the street.

The documentary also presents vignettes from those who have worked within the industry. There is a clip from Dr. Linda Peen, who testified before Congress about denying people coverage: "I denied a man a necessary operation that would have saved his life and thus caused his death. No person and no group has held me accountable for this. Because, in fact, what I did was I saved a company a half million dollars with this." Big money is involved in the health care system, and Moore touches upon this with brief look at the $100 million spent to defeat the Hillary Clinton's attempt to reform the health care system. Now, she is the second-largest recipient of health industry money. It is estimated that this multibillion-dollar industry has four lobbyists for each member of Congress. The odds against making health care coverage universal are staggering.

In the most entertaining and edifying section of the documentary, Moore compares and contrasts the U.S. health care system to those of Canada, Great Britain, and France, where all citizens receive free medical benefits. The myths about the evils of "socialized medicine" are debunked, and it becomes clear that Americans have been shafted by the pharmaceutical industry, the hospital business, and the insurance carriers. To point out the value of government-paid universal health care systems, Moore takes some very sick 9/11 rescue workers, who have not been able to get adequate treatment in the United States, to Cuba where their ailments are attended to at a Havana hospital. Then these 9/11 volunteers are given a hero's welcome by Cuban firemen who feel a solidarity with them that goes beyond nationalistic pride. Moore makes the spiritual point with Sicko that we need that same kind of solidarity in America so that everyone can get the care they need and we can truly be known as a caring nation. 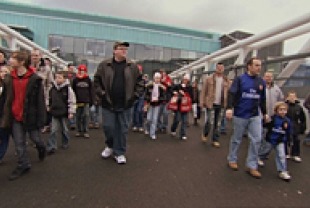 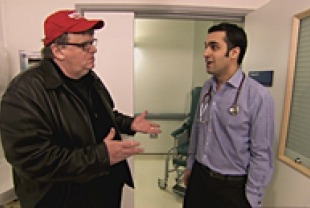 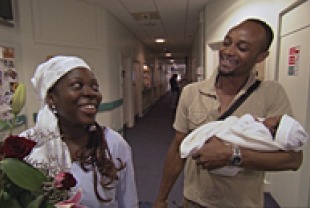 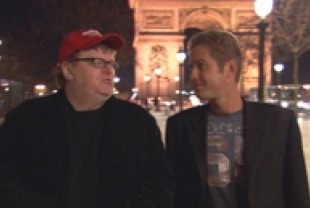