Eye of the Dolphin

Directed by Michael D. Sellers
A lonely dolphin serves as a mediator in the reconciliation of a father and daughter who don't know how to connect with each other.

Fourteen-year old Alyssa (Carly Schroeder) has lived with her grandmother (Katharine Ross) since the drowning death of her mother. Although she has great academic potential, she smokes pot in the bathroom and disdains the small world around her, hiding behind her iPod. When Alyssa is kicked out of school, her mother decides to try a drastic remedy: taking her to the Bahamas to meet her father, Dr. James Hawk (Adrian Dunbar), who is doing work on communication with dolphins at a research center; he is unaware that he even has a daughter.

Alyssa doesn't respond very well to the culture shock of being on a Caribbean island. But Tamika (Christine Adams), her father's lover and assistant, and her friendly father Daniel (George Harris) do their best to make the pouty outsider feel at home. Alyssa has a hard time getting used to the fact that James is her father and that he tried to communicate with her mother via letter for years after she left him.

While out by herself, Alyssa discovers that she has the ability to communicate with a wild and lonely dolphin who lives in the ocean apart from the two dolphins who are part of her father's project. This ability comes in very handy when the local authorities try to shut down the research center to set up a more profitable "swim with the dolphins" tourist attraction.

Eye of the Dolphin is a fine family film that once again makes it clear that animals can often play the role of mediators in reconciling human beings who are uneasy with each other and don’t know how to connect. 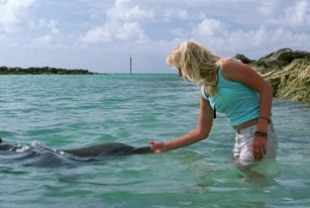