Down in the Delta

Directed by Maya Angelou
An emotional tale of a single mother whose faith is renewed through her exploration of family roots.

Loretta (Alfre Woodward) is an unemployed single parent who lives with her take-charge mother Rosa Lynn (Mary Alice) and two kids in an inner-city Chicago apartment. She's not doing well, spending most of her time numbing out with alcohol and drugs. Her daughter is autistic, leaving it to her teenage son Thomas (Mpho Koaho) to try to make things better. He listens to tapes on positive thinking and makes money by taking photographs of tourists.

Rosa Lynn decides she has to get this family out of the city, if only for a little while. She pawns the family heirloom, a silver candelabra nickname "Nathan," for bus fare to send Loretta and her children to Mississippi to spend a summer with Uncle Earl (Al Freeman Jr.), who owns a chicken restaurant. His wife Annie (Esther Rolle) suffers from Alzheimer's and is being taken care of by Zenia (Loretta Devine).

Loretta begins working at the restaurant and discovers she can actually be good at something. Her self-esteem is given a further shot by Earl's lawyer son Will (Wesley Snipes), who backs her involvement in an attempt to take over a chicken processing plant that is about to close in the community. And throughout her whole experience down in the Delta runs a current of family solidarity that she and her children have never felt before.

Maya Angelou's debut as a feature film director is strong and convincing. The sturdy screenplay by Myron Goble depicts the subtle yet very realistic ways in which Loretta's life is turned around and renewed through her exploration of family roots and the legacy of her ancestors. Down in the Delta celebrates the spiritual possibility of transformation and the truth that every family has a potential for resiliency and growth, no matter what the problems. 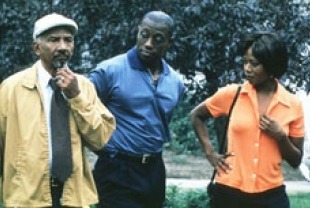