Directed by Jason Reitman
A bright and funny comedy about precocious and big-hearted teenager on a mission of love.

Juno (Ellen Page), a precocious and spunky 16 year old, has sex with her boyfriend, Paulie Bleeker (Michael Cera), in a big comfortable chair. Later after taking several pregnancy tests in a row at a drug store, Juno discovers that it truly was a momentous event. Since, as she puts it, "pregnancy can lead to an infant," she makes a hasty trip to a clinic to get an abortion, but she cannot bring herself to do it. Knowing she's not equipped to raise a child, she decides to give the baby up for adoption. All she wants is for the child to have a loving family, and Mark (Jason Bateman) and Vanessa Loring (Jennifer Garner) seem to be perfect. Juno's best friend Leah (Olivia Thirlby) finds their ad for a child in the Pennysaver newspaper right next to the ads for exotic birds.

Juno's working-class dad, Mac (J. K. Simmons), and stepmother, Brenda (Alison Janney), are taken aback by the news but immediately offer to stand by their daughter and support her in every way they can. Mac insists on going along to meet the yuppie prospective parents who live in one of those McMansion houses in a suburban development. They have tried to adopt before and know that it is a hard road fraught with difficulties. Juno is very upfront with them; she doesn't want to sell her baby, and she'll be happy to keep them informed about how it's "cookin'." After the deal is sealed with the papers prepared by their lawyer, the Lorings seem quite relieved. Juno, only guessing at what lies ahead, admits it would be great all around if she could just give birth as soon as possible and make the transfer as simple as possible. "Can't we just kick it old school? I could just put the baby in a basket and send it your way. You know, like Moses in the reeds."

Juno is directed by Jason Reitman who demonstrated his facility for working with quick-witted and snappy dialogue in Thank You for Smoking. The screenplay by Diablo Cody is one of the brightest, funniest, and best of the year. But what really shines here is the superlative performance by Canadian Ellen Page! She makes Juno into a spunky and idiosyncratic young woman who always has something interesting to say. On the ethical level, she is a kind and generous soul whose exquisite act of selfless love is nothing short of a miracle to Vanessa, a woman who feels her life is not complete without a child.

Juno's teenage pregnancy compels her to grow up fast and to make important decisions on a regular basis. She has several close encounters with Mark Loring and discovers she shares with him a love of music and a passion for schlock horror movies, which complicates her already jumbled life. At school, she has to deal with all the stares and snickers of her classmates. And when Juno finds out that Paulie is taking another girl to the prom, she has a snit fit.

Remarkably, Juno bears all the challenges of her pregnancy very well, and despite her quip to her dad that she's dealing with things "way beyond my maturity level," she demonstrates that her heart is big enough to take it all in and give back in abundance. A final note of praise to the wonderful songs by Kimya Dawson. 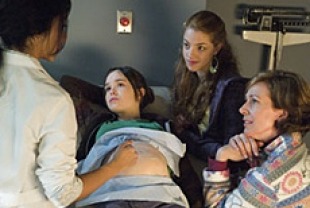 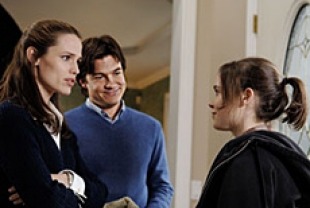 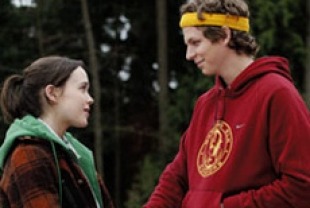