Directed by Diane Crespo, Stefan Schaefer
A drama about the friendship between an Orthodox Jewish woman and a Muslim woman.

Rochel Meshenberg (Zoe Lister-Jones) is about to begin teaching special education at a public school in Ditmas Park, Brooklyn. She is an Orthodox Jew of marriage age, and her parents are very excited about finding her a husband through a matchmaker. They are convinced that this process will be an adventure for her, "the most exciting time of her life." At school, she meets Nasira Khaldi (Francis Benhamou), another first-year teacher who is a Muslim woman of Syrian descent. Her parents have also begun to look for a husband for her.

Rochel and Nasira's supervisor, Principal Jacoby (Marcia Jean Kurtz) is a secular Jew who is saddened to see these two bright and attractive women dressing so conservatively and subjecting themselves to what she views as an outmoded and repressive patriarchal system. For example, she suggests that Nasira's wearing of a headscarf actually gets her more attention, which "defeats the purpose." Although she claims to want only the best for the two teachers, her criticism seems highly inappropriate to Rochel and Nasira, who start a friendship.

In the classroom, the kids question whether they hate each other since they have heard that the Muslims want to get rid of Jews. Rochel designs a unity circle exercise in order to help the students better appreciate differences and the benefits of choice and community. When Rochel invites Nasira to her home to work on a school project, her mother gets very upset. She worries about what the neighbors will say about her daughter having a Muslim friend and even if it might affect her prospects for getting a husband.

Rochel begins meeting men suggested by the matchmaker, but they are either too shy or too self-absorbed. She tells her mother that she'd rather wait than marry one of them. She even visits a cousin who left the Orthodox tradition for her own brand of freedom. Invited to "step into the world and see how it feels" by going to a party, Rochel tries to fit in but she feels extremely uncomfortable with the liquor, the drug use, and couples necking.

Nasira has an easier time getting rid of a suitor who is a middle-aged acquaintance of her father. She believes that she will meet a suitable husband according to God's will and besides, she knows the tradition of arranged marriage works since her father and mother are a good example.

Arranged is one of the most spiritually literate films of the year. Directed by Stefan Schaefer and Diane Crespo, it is carried into our hearts by two radiant performances by Zoe Lister-Jones and Francis Benhamou as Rochel and Nasira. It is a delight to see a film that celebrates the integrity and zeal of two deeply religious women as they question tradition but in the end discover they can support it as a path with meaning. This is the kind of small independent film that often gets lost in the shuffle of big releases. Make time to experience this rare religious drama that salutes the free choices of an Orthodox Jew and a Muslim as they create a deep friendship at a crucial juncture in their lives. 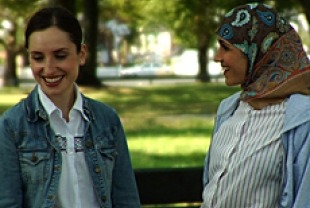