This extraordinary documentary directed by St. Clair Bourne originally aired on PBS as part of the "American Masters" series. It charts the life and artistry of Paul Robeson (1898-1976) who won international acclaim as a concert performer, stage actor, recording artist, and film actor. Raised by his widowed father, a minister, he was a scholar and athlete at Rutgers. After attending Columbia Law School, Robeson plunged into a career in the arts that continued for 40 years. Throughout his life, this black performer identified with the rights of his people and the working class poor.

Robeson reached the pinnacle of success in the 1930s. Then during the 1940s he spoke out against America's racism and declared his support for the U.S.S.R. as an antidote to fascism and imperialism. These political stands had a dire effect on his career. He was put under surveillance by the FBI, blacklisted across the country, and denied a passport by the State Department

This riveting documentary explores Robeson's multidimensional gifts and the high price he had to pay as a spokesperson for black liberation. Paul Robeson: Here I Stand hits home in its convincing portrait of this African American's noble struggle and his ardent attempt to remain true to his principles. 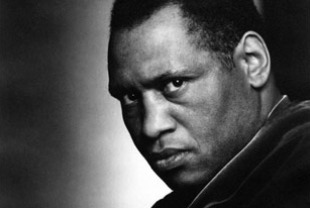