What Would Jesus Buy?

Directed by Rob VanAlkemade
A modern-day teacher of crazy wisdom preaching against runaway consumerism in America and its allied evils of credit-card debt, corporate globalism, and the shafting of Third World workers.

This spunky and vitriolic documentary directed by Rob VanAlkemade and produced by Morgan Spurlock (Super Size Me) depicts the 2005 cross-country bus tour of Rev. Billy (playwright and actor Bill Talen) and his 35-member choir and seven-member band. They begin in New York where members of his Church of Stop Shopping do street theatre with Rev. Billy preaching against the rampant consumerism which has resulted in the trivialization of Christmas, massive credit-card debt, and corporate globalization. The narrator at one point states: "We used to be a nation of producers and now we are a nation of consumers. American stores could already fit every man, woman, and child in North and South America inside them at one time." In a countdown to Christmas, the documentary shows through interviews how children and their parents are obsessed with the latest toys and hottest consumer items. A little girl proudly shows all her dolls and other goodies before crawling under her bed to retrieve even more possessions.

Midway in the film, Rev. Billy's bus is bumped by an 18-wheeler hauling goods across the country, and some of the members of the Church of Stop Shopping are injured. Talen hopes to raise people's consciousness about the dominance of shopping malls, the demise of independent retailers, and the exploitation of slave labor in Third World countries where Wal-Mart and other successful corporations work poor people, including children, around the clock for a pittance. A labor expert notes that in many Third World countries labor organizers have their kneecaps broken. When asked about these egregious results of consumerism, many shoppers say there is nothing we can do about this sad state of affairs and besides, the only thing that matters is low prices.

Rev. Billy calls Mickey Mouse "the Antichrist," walks through the Mall of America (which has its own university and police force) speaking out against the idol of shopping, holds an exorcism outside Wal-Mart Headquarters, and causes quite a commotion at Disneyland where he is arrested and hauled off to prison. At one point, his frustrated wife Savitri states: "If they do hear us, they so don't want to hear us. . . I need for what we do to have some impact on someone soon."

Although some of Rev. Billy's antics seem a bit over-the-top, he is savvy enough to know that the only way to make the TV news is to be entertaining. All in all, his anti-consumer crusade stands in the noble tradition of crazy-wise spiritual teachers who use their eccentricity to startle or shock the conventional mind. Rev. Billy is part trickster, part clown, and a serious social activist trying to get people to "back away from the product" and to stop shopping. 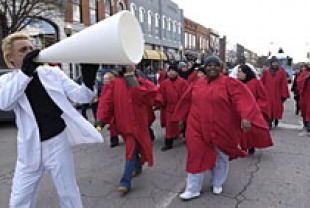 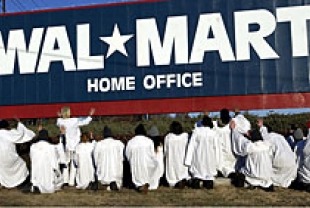