Directed by Chris Eska
A shooting star of a movie that stirs us with its many different textures of beauty.

For many people from traditional cultures, the dream of old age includes a large house where the extended family gathers periodically to celebrate birthdays and other important events. Offspring are grateful for all you have done for them, and you have special ties to all the grandchildren. In this vision, the generations interact with love and respect.

But not everyone can achieve the beauty and bounty of this fantasy. Events often intervene: death, the loss of a job, relocation. Many elderly parents find themselves ignored or abandoned at the very time they are dependent upon the kindness and generosity of their children The gap between the dream and the reality of family solidarity is at the heart and soul of August Evening, a dramatically rich and emotionally affecting film written, directed, and edited by Chris Eska, a 32-year-old Texan.

Jaime (Pedro Castaneda) is an undocumented Mexican farm worker who lives in Texas with his wife Maria (Raquel Gavia) and Lupe (Veronica Loren), their widowed daughter-in-law, who teaches guitar to local kids. They do not have much money and struggle to make ends meet. And so they are unprepared for the changes which sweep over them in rapid succession. First Maria dies; then Jaime's two adult children return to the homestead they haven't visited for years. Victor (Abel Becerra), who's never been close to his father, lives in San Antonio and works for a big company. Alice (Sandra J. Rios) lives in a suburb there and looks down on her parents' simple life. They both make sure that their visit is short and sweet.

Then Jaime loses his job taking care of chickens. At first, he doesn't tell Lupe. After a week of searching for work and coming up empty, they decide to go to San Antonio and tentatively stay first with Victor and then with Alice. It turns out that Victor has lost his job as well and is fixing air-conditioners part-time. He has two kids, and his father is stunned when he realizes that his son never brought them to visit.

Victor introduces Lupe to Luis (Walter Perez), a butcher who immediately is attracted to the quiet and detached stranger. It is obvious from the start that the rest of the family want her to settle down and get married. She still feels a loyalty to her dead husband and is not ready for another intimate relationship. And, too, taking care of Jaime feeds her maternal instincts. But he is adamant that she start to think about her own future. After Jaime and Lupe move on to Alice's home, more changes are in store for them.

In a director's statement, Chris Eska has stated:

"At the heart of this story is the conflict between generations. Aging parents and grown children have difficulty expressing both their love and mutual disappointment in each other. A father recognizes the unstoppable force in time and must say goodbye to his daughter-in-law so she can start her own life.

"For inspiration, I've looked to the naturalistic world cinema of the 1950s, and an approach that values subtle yet conflicting emotions above frantic action and the overt fears and pleasure that tend to drive many current films. It includes subtle romance, gentle humor, and heartbreaking tragedy — but it should not be depressing. Instead we concentrate on the Japanese idea of 'mon no aware,' which is difficult to translate, but involves finding peace with life's imperfections."

Eska has made a spiritual film that incarnates the Japanese appreciation for the fleeting and fragile nature of life. In his old age, Jaime at first struggles with the transformations rocking his life but as time goes on, he embraces change and the unknown. He mourns the loss of his wife but finds a small moment of solace sitting in the back yard alone at a time of the day she loved. He laments the lack of communication with Victor but patiently waits for him to come to a place of listening and true communion. He sees a woman in a store who looks like Maria did as a young woman but does not become attached to the idea; he enjoys it and lets it go. Jaime would like to have Lupe stay on as a companion looking after him but he refuses to put himself first. He takes great pleasure in seeing her love affair with Luis bloom. All of these are examples of "mono no aware" which honors the impermanence of life.

August Evening is a shooting star of a movie that stirs us with its many different textures of beauty — in its characters, in their words and deeds, in the natural world, and in the constant cycle of creation and destruction. 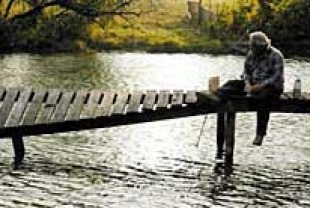 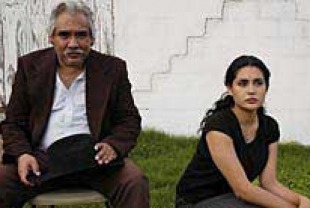 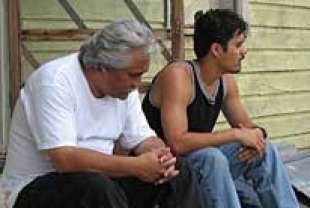 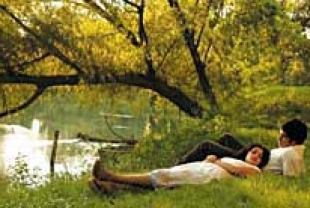