A Thousand Years of Good Prayers

Directed by Wayne Wang
The chilly reunion of a Chinese father and his American daughter who dance around a divisive family secret.

When Yilan (Faye Yu) greets her father, Mr. Shi (Henry O), at the Spokane airport, they do not hug. They have not seen each other for 12 years: he lives in China, and she is now an American working as a librarian. As they eat dinner in her apartment, the conversation does not flow easily between them. Yilan always got along better with her mother; her father spent his time at his job. He does most of the talking as he did on the airplane with another passenger who enjoyed his reminiscing about his work as a rocket scientist. Clearly there is something about her father's presence that bothers Yilan but she leaves the next morning for work without even partaking of the grand breakfast he has made for her.

Soon a pattern develops. She stays out late in the evenings, and Mr. Shi is forced to fend for himself during both the day and the night. He diligently reads the newspapers writing down new words in a little notebook. One day he stops by the pool and a pretty young blonde in a bikini starts talking with him. Mr. Shi is clearly uncomfortable in her scantily clad presence and flees. In the park he meets Madame (Vida Ghahremani), an older Iranian woman who speaks only broken English just like he does. Yet they manage to connect on a level that surpasses the communication with his own daughter.

Mr. Shi tries to pick up some clues about Yilan by snooping around in her room. She has recently divorced and her father is sad to see her so unhappy. Yet whenever he asks her questions about her private life, she refuses to answer. It seems that she is similar to the Russian matrioshka dolls in her bedroom, constantly hiding one thing after another. One evening, he sees her come home late with a man who looks like a foreigner. Yilan admits to having an affair with this Russian who is a co-worker and already married. This confession leads father and daughter into a close encounter with a family secret that has bothered Yilan for years.

A Thousand Years of Good Prayers is directed by Wayne Wang based on a collection of immigrant stories by Yiyun Li. It bring to mind the character driven and slow unspooling of his 1989 film Eat a Bowl of Tea. A father provides his daughter with the first images of a man in a woman's life and, as a result, shade the feelings they have about the opposite sex. The emotional chilliness between Mr. Shi and Yilan is painful to watch. He wants to reconnect but she doesn't want to open up. When they finally move beyond his Mr. Fix-it role and her Miss Independence role, they are ready to begin relating as two vulnerable human beings who have made mistakes in their love relationships.

Henry O is very convincing as Mr. Shi and Faye Yu, who was featured in Wang's wonderful film The Joy Luck Club, comes across well in the closing scenes. The title of the story is taken from a Chinese proverb: "It takes three thousand years of prayers to place your head side by side with your loved ones on the pillow. For father and daughter? A thousand years, maybe." 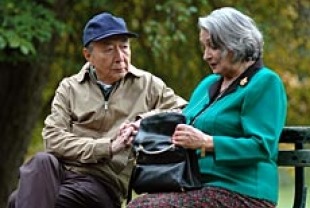