Directed by Kiyoshi Kurosawa
A startling contemporary fable about some of the drastic changes that are rocking the traditional understanding of work and family life in Japan.

There once was a time when Japan towered over other countries in the world as a model of economic success and efficiency. This well-ordered society was looked up to as a paragon of stability. Not so anymore as demonstrated by this creative and engaging fable directed by Kiyoshi Kurosawa and based on a script by Australian writer Max Mannix. Here are some of the startling images from Tokyo Sonata:

• A business executive learns that he can outsource work to China where they can get three laborers for the price of one in Japan.

• Lines of men and women waiting hours to interview for menial jobs with low pay.

• Lines of homeless people and more unemployed men in suits waiting to be fed cups of porridge.

• Unemployed men in suits sitting in parks or the library with time on their hands and nothing to do.

• An unemployed man who has his cell phone programmed to call him regularly so he will look busy to others.

• A young man bids farewell to his mother after enlisting as a soldier in the U.S. military.

• A young boy sits with a music teacher in her home secretly taking piano lessons purchased with his lunch money.

• A locksmith who failed in his business has turned to robbery.

• A dedicated housewife and mother who has subordinated her needs to the men in her family is abducted from her home and, for the first time in her life, envisions a future of her own making.

• A former business administrator lands a low-paying job as a janitor at a mall.

Ryuhei Sasaki (Terayukie Kagawa) loses his job as an administrator but feels so ashamed that he cannot tell his wife Megumi (Kyoko Koizumi). He spends his days at employment agencies and discovers that the only jobs available are low paying and menial ones. At a free-porridge charity line, Sasaki meets Kurosu (Kanji Tsuda), an old friend, who is also unemployed. He teaches him the tricks of finding things to do during the day and takes him home for dinner as a business associate.

As his frustration and anger grows, Sasaki takes out his rage on his two sons. Taka (Yu Koyanangi) enlists in the U.S. military and is banned from the household. His younger son Kenji (Inowaki Kai) is shoved down the stairs for disobeying his father and taking piano lessons. All this household tension leads Megumi to revolt when a robber takes her as a hostage after she sees his face.

Kurosawa makes the most of the changes transforming the lives of Sasaki and his family. The clever and multidimensional screenplay captures and conveys the shocks which have jolted traditional understandings of work and family life in Japan. A surprise ending envelops the characters in a rainbow of peace, beauty and hope.

Special features on the DVD include a "Making-of" featurette; theatrical premiere footage; a Q & A with director Kiyoshi Kurosawa and the cast; and DVD discussions. 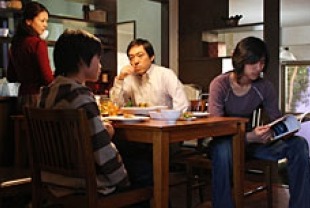