Directed by Sam Mendes
An unflinching look at the discontent of a suburban couple and the ways they deal with the death of their dream of liberation.

Frank (Leonardo DiCaprio) and April Wheeler (Kate Winslet) are a handsome couple living in a comfortable Connecticut suburb with their two small children. The time is the 1950s. She once wanted to be an actress but was disappointed with her lack of talent. He commutes to Manhattan where he works for a large business machines corporation which he sees as "the dullest job you can possibly imagine." His father worked for the same company and was also a very unhappy employee. On his 30th birthday, Frank gives himself a present by sleeping with Maureen Grube (Zoe Kazan), a young secretary.

In order to tamp down their mutual discontent with their suburban lives, the Wheelers drink and smoke and talk too much. There is a restlessness in their relationship that proves debilitating to their intimacy. Then April comes up with a solution to their situation: sell their house and move to Paris. She can work in the secretarial pool at NATO and Frank can take some time off to find himself and determine what he really wants to do. They can live frugally overseas, and the kids can learn French. Frank, who loves the city of Paris, is excited about the idea and begins to see all the wild possibilities of this adventure which could definitely transform their lives and free them from the trap of suburbia.

Their neighbors, Shep (David Harbour) and Milly Campbell (Kathryn Hahn), are shocked at this radical idea, which they regard as juvenile and risky. Frank's co-workers are also stunned by the news; doing such a thing is unheard of in their circles. Feeling exhilarated by a new sense of energy and purpose, Frank writes an important report and suddenly finds himself courted for a new position of power in the company with a higher salary. Bart Pollack (Jay O. Sanders) wants him to be part of a team working on new product for the coming computer age.

While April starts packing, and the kids grow more excited by the move, Frank begins to think that the idea is not as wonderful as he first thought. This reluctance leads to a series of vicious arguments and fights with April. Part of their anger with each other is fueled by several visits to their home by Helen Givings (Kathy Bates), their realtor, her husband Howard (Richard Easton), and their son John (Michael Shannon), who is clinically insane and has been institutionalized. This socially awkward man cuts through the Wheeler's talk about freedom and unearths their deepest fears and the severe troubles in their marriage. The final straw that sends Frank and April into a maelstrom of hatred for each other is the news that she is pregnant again.

Revolutionary Road is directed by Sam Mendes (American Beauty) based on Richard Yates' 1961 novel. The book has been adapted for the screen by Justin Haythe. The novelist John Cheever once observed: "The main emotion of the adult American who has had all the advantages of wealth, education, and culture is disappointment." With unflinching rigor, this drama depicts the discontent harbored by so many unhappy souls who can find scant happiness in their marriages, work, or role as parents. Revolutionary Road vividly conveys the yearning which animates April and Frank's relationship. For a while, it blocks out the deadness that surrounds them: "We're running from the hopeless emptiness of the life here," Frank says about the Paris plans. But when the air is let out of their dream of liberation, all they are left with is the same old nagging malaise of disappointment and unhappiness. It is painful to watch the fights that ensue and how they hurt each other. Revolutionary Road definitely conveys the shadow side of marriage which can lead to extreme loneliness and intense suffering.

Special features on the DVD include a commentary with director Sam Mendes and screenwriter Justin Haythe; deleted scenes with a commentary by Mendes and Haythe; and "Lives of Quiet Desperation: the Making of Revolutionary Road." 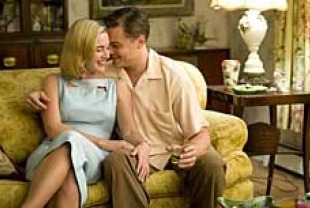 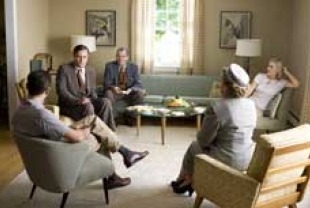 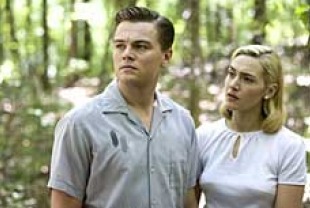