Directed by Doris Dorrie
An exquisitely acted and visually stunning German drama which vividly conveys the beauty and profundity of impermanence.

The Japanese have a term, "mono no aware," which refers to the fleeting nature of the world. This aesthetic and spiritual concept conveys "the slender sadness" of the human condition. We desire permanence but everything is constantly changing. Despite our efforts to control things, there is nothing we can cling to or hold on to. It is best to savor the moment of beauty as it passes in the tender loving touch of a lover, in the purr of an adoring and peaceful cat, in the energetic leap of a dancer, in the gentle swaying of trees in the breeze.

The impermanence of life is at the core of Cherry Blossoms, an exquisite German film directed by Doris Dorrie (How to Cook Your Life). A wonderful sequence in the story takes place during the cherry blossom season at the beginning of spring in Japan. Hanami is celebrated for about ten days as families, friends, and visitors gather under trees while their pink and white flowers are in full bloom. The cherry blossom is seen as a symbol of beauty, awakening, and the transience of life. In a haiku, Issa has written:

"In the cherry blossoms' shade
There is no such thing as a stranger."

Trudi (Hannelore Elsner) and Rudi (Elmar Wepper) have been married for many years and live in a small Bavarian town. She is a dreamer interested in the arts and adventure. He works as a civil servant in the Department of Waste Management. She wanted to become a dancer and move to Japan. He is very much caught up in the regular routines of his life which he follows diligently: taking the train to work and eating a sandwich and an apple for lunch. She desires change, and he fears change. Despite their differences, they have forged a strong marriage and live alone now that their three children are grown.

Learning that Rudi only has a short time to live, Trudi convinces him to take a trip to Berlin to visit two of their children. He reluctantly agrees to go but is not excited by the journey. While she struggles to find the right moment to tell her husband about his imminent death, their two children, a son (Felix Eitner) with wife and kids, and a lesbian daughter (Birgit Minichmayr) and her lover, only have a limited amount of time to give to their parents. They make it quite clear that they have little in common across the generations.

Trudi decides to leave Berlin for a visit to the Baltic Sea, a place she finds romantic and soothing. While they are there, she unexpectedly dies peacefully in her sleep. Rudi returns to their home and is unable to cope with his feelings of loneliness and guilt. For the first time in his life, he realizes that he never really honored Trudi's deepest yearnings. Since her life always pointed to Japan, he decides to visit his youngest son Karl (Maximilian Brueckner) who lives and works in Tokyo.

Dorie Dorrie is a spiritually sensitive German film director who has made a remarkable and touching film about impermanence, death, grief, and the healing power of creativity. With a Zen appreciation of small details, this drama is peppered with magical cinematic moments involving water, mountains, dandelions, flies, and cherry blossoms. The story of Rudi's spiritual journey to Japan unfolds slowly, and we are able to sense the courage it takes for him to make such a trip in order to commune in a very real way with Trudi. Karl, who has never been close to his father, spends a lot of time at work. He misses his mother and like Rudi regrets that he wasn't more attentive to her.

Rudi is delighted to be in Tokyo during Hanami, cherry blossom time. In an interview the filmmaker Dorrie states:

"One has to give love a chance to reveal itself in its greatest pain and strength. That's why the Japanese sit under the cherry blossoms, because they are tremendously beautiful when they are blooming. At the same time the pain over the fact that this period of blossoming is short-lived is tremendous as well. One has to catch the moment when they are actually blossoming, that's why they have people monitoring the trees. Because, if you miss that particular moment, that's it, for an entire year or possibly forever. In love, one has to keep at it, one has to give it the chance to blossom and, when it does, one has to actually be there to appreciate it. That's what it's all about; that each person, each plant, each animal is granted a moment when it can truly blossom and reveal itself. But what often happens to us, and to Rudi, is that we just keep suppressing it. We never allow our true self and our true beauty to reveal itself, to blossom like the cherry tree does."

In the park, Rudi sees and meets Yu (Aya Irizuki), a teenage Butoh dancer. He is drawn to her since Trudi had an immense fascination with this art form and yet never had a chance for it to blossom. She reveals that her dance is a communion with her deceased mother who loved talking on the phone. Yu's movements mirror her tribute to her and her playful encounter with shadow. One day Rudi shows up dressed in Trudi's skirt, sweater, and necklace beneath his coat. He surrenders himself to Yu who touches his heart with her craft and friendliness. That is why he chooses her to accompany him on a pilgrimage to Mount Fuji, a powerful place that Trudi reverenced from Bavaria. The moving finale to Cherry Blossoms is a tour de force which vividly conveys the inherent beauty and profundity of impermanence. 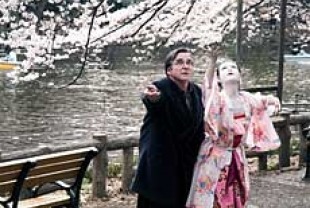