Directed by So Yong Kim
A wonder-inducing drama about a six-year-old Korean girl who takes on adult responsibilities when she and her little sister are abandoned.

"May you know that absence is full of tender presence and
that nothing is ever lost or forgotten.
May the absences in your life be full of eternal echo.
May you sense around you the secret Elsewhere which
holds the presences that have left your life."
— John O'Donohue in Eternal Echoes
Deep inside each of us is the fear of abandonment. It is a primal feeling that can overwhelm other everyday concerns. It demolishes our sense of self and leaves us in a state of panic about the future. For those who experience this dread, home is not a safe haven; it is a prison. For some children, this fear is compounded when they are forced to deal with realities beyond their emotional and mental capacities. Tested in this way, they suffer but also occasionally develop new talents and sensitivities. This is what happens to the six-year-old protagonist in this astonishing Korean film written and directed by So Yong Kim.

Jin (Hee Yeon Kim) lives with her mother (Soo Ah Lee) and little sister Bin (Song Hee Kim) in an apartment in Seoul, South Korea. She is a bright six year old who loves to draw and does well in school. Her working mother depends on Jin to look after her little sister. When things take a turn for the worse, she decides that it is time to go back to her estranged husband and work things out with him. She gives her two young daughters a piggy bank and promises them that she will return when it is full. Then she deposits them with Big Aunt (Mi Hyang Kim), an alcoholic woman who doesn't like kids and lives alone.

Jin misses school but tries to keep her mind active. Big Aunt often forgets to feed them, and the two little girls eat fried grasshoppers which they catch and sometimes even sell on the streets of the city. Jin and Bin eagerly try to fill the piggy bank with coins, believing that the quicker they do so, the faster their mother will return. Jin discovers that using change is the secret to fulfilling the project. But she is immensely disappointed when her mother does not arrive on the bus they meet. Jin becomes convinced that her mother is a liar and not trustworthy.

When Big Aunt's patience with looking after the kids runs out, she hands them over to their grandmother who lives with her husband on a farm. He wants nothing to do with them but she decides to take them under her wing. There are many chores to do and the little girls never go without food. Inspired by grandmother's example, Jin taps into her own maternal instinct and fondly takes care of her younger sister.

Treeless Mountain is propelled by the two astonishing performances of Hee Yeon Kim as Jin and Song Hee Kim as Bin. Although lonely and disappointed in their fate, they both become resilient survivors as they move from the city to the countryside. The writer and director So Yong Kim says she was very impressed with Ponette and Nobody Knows, two extraordinary movies with young non-actors playing the lead roles. This wonder-inducing drama can stand alongside these two! 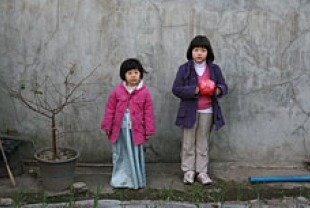