Directed by Oliver Hirschbiegel
An emotionally gripping drama about two men given a chance to reconcile with each other after many years of inner torment and anger.

"When you forgive somebody who has wronged you, you're spared the dismal corrosion of bitterness and wounded pride," Protestant writer Frederick Buechner has observed. "For both parties, forgiveness means the freedom again to be at peace inside their own skins and to be glad in each other's presence." Forgiveness offers us a chance to start over again but far too often people consumed by hatred and anger give in to the impulse to seek revenge. That is the case with the agitated Irish protagonist in Five Minutes of Heaven whose life was upended by a violent incident he witnessed as a child. He can’t let it go. He plays the event again and again in his mind. Oliver Hirschbiegel (Downfall) is the director of this compelling film inspired by real-life figures. Guy Hibbert's poignant screenplay recently won the "World Cinema Screenwriting Award" at the Sundance Film Festival (2009).

In 1975 in a small Northern Ireland town, Alistair (Mark Davison) is a 16-year-old Protestant youth who is actively involved in a band of pro-England guerillas. He is proud to have been given a gun and his "first kill" assignment by a superior. Alistair is to assassinate a Catholic youth who was asked to leave the area but has disregarded the order. There is a great deal of excitement as he and his three friends drive to the assigned place in a stolen car. Alistair fulfills the mission but is seen by the victim's 11-year-old brother Joe (Kevin O'Neill). This young boy's life turns into a living hell when his mother begins an unrelenting campaign of blaming him for not doing anything to help save his older brother. In addition, Joe can just not get the shooting out of his head, no matter what he does.

Thirty-three years later, Alistair (Liam Neeson) has served 12 years in prison and is now a world-famous expert on conflict negotiation and the dangers of groups that espouse violence to achieve their ends. Joe (James Nesbitt) still lives in the same small town with his wife and two daughters. The two men have been asked to be featured on a television program where they can achieve some kind of reconciliation. Whereas Alistair is looking forward to their encounter and the mental, emotional, and spiritual relief it will bring, Joe is very agitated about it. In several private conversations with a production assistant, Vika (Anamaria Marinca), who is a good listener, he admits being consumed by feelings of revenge. In his mind, murdering Alistair would provide "five minutes of heaven."

This film vividly explores and exposes the difficulty of forgiveness in a world where anger, hatred, and resentment are so rampant. Alistair understands that this spiritual practice is an effective way of letting go of the past, settling accounts, doing good, and moving into the future with hope. Joe desperately wants a release from his imprisonment in the past. Five Minutes of Heaven features a surprising finale which is worth pondering at length and then talking about.

Special features on the DVD include "Behind the Scenes." 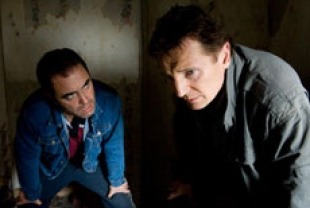