Director Steven Soderbergh is always taking chances with his movies, and that is what makes him such an enjoyable artist. The Informant! is based on the true story of the highest-ranking corporate whistleblower in U. S. history whose escapades are chronicled in a book by Kurt Eichenwaid. Instead of telling this story straight, as Michael Mann did with a tobacco company case in The Insider, Soderbergh grounds it in an incredibly clever and funny inner monologue of the protagonist. Here is the perfect example of what the Buddhists call "the monkey mind," which leaps and jumps randomly from one thing to another. While the whistleblower drives his car or approaches a business contact, he ruminates about being Tom Cruise in The Firm, buying Brioni ties in Paris, why polar bears cover their noses while hunting, or Japanese men who buy used girls' panties. At one point, he describes himself to a handyman as Agent 0014 because he's twice as smart as 007.

In 1992, Mark Whitacre (Matt Damon) is the young president of the byproducts division of Archer Daniels Midland, an agribusiness conglomerate which has its hands into most of the products on local supermarket shelves. They produce high fructose corn syrup, which shows up in most every processed food. Now Mark's division is working on a new additive called lysine. This puts him on the fast track at ADM and means he does a lot of traveling around the world.

Mark drives a Porsche, lives in a large house with his wife (Melanie Lynskey) and his son. Everything seems to be gliding along perfectly for this expert in nutritional biochemistry. But things begin to go awry when he tells his boss that the company is being blackmailed by a Japanese competitor. ADM calls in the FBI to tap his phone lines. When the agent is at his house, Mark, pushed by his wife, reveals to agent Brian Shepard (Scott Bakula) that he is upset by his company's price fixing operation. Seeing himself as a valiant good guy who will be rewarded for cleaning up the corporate malfeasance and even given a promotion when the investigation is all over, he agrees to wear a wire to gather evidence against his superiors. As the case develops, Shepard wisely observes, "Everyone is this country is a victim of corporate crime by the time they finish breakfast." (To see what he is talking about in more detail, check out the documentary Food, Inc.)

Relying upon a witty and darkly humorous screenplay by Scott Z. Burns, Soderbergh keeps the surprises coming as Mark's relationship with the FBI expands into five years during which he makes hundreds of tapes of his meetings. This usual comedy exposes the ethical disarray in the corporate world where lying, illegal activity, and greed are rampant. Matt Damon puts in a memorable performance as the fast-talking, manic, and deluded young man whose tricky machinations keep us wondering whether we can trust him or not. Soderbergh has created another creative addition to his impressive collection of adventuresome movies.

Special features on the DVD include additional scenes. 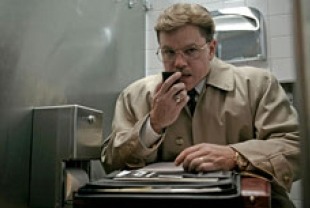 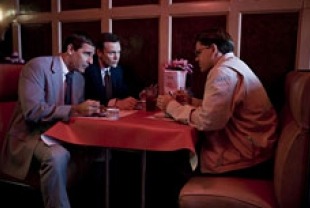 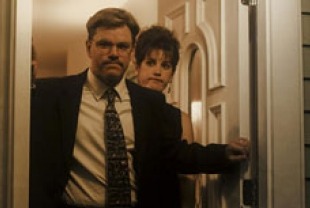 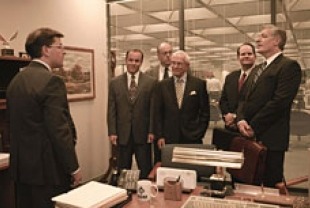