Directed by Michael Moore
Michael Moore's hard-hitting documentary about the egregious spin-offs from the American obsession with unbridled capitalism and greed.

Since the 1950s, the media, government spokespersons, and businesses have all proclaimed capitalism to be a wonderful and good thing for the United States, something which should be supported by all truly patriotic Americans. But in recent years, the truth has emerged: Capitalism is a wonderful and good thing for the richest one percent of Americans who use their incredible wealth and power to keep things going their way. The rest of us feel the raw edges of the profit motive which turns out to be very painful indeed. And it's getting worse by the day. Is a rebellion brewing between the people who have nothing and the people who have it all?

In his latest prophetic documentary about the country he loves, Michael Moore charts the heavy toll on middle-class and poverty-stricken citizens resulting from the adventures and exploits of corporate dominance in the land of the free and the home of the brave. For many of those depicted in this hard-hitting documentary, the American dream has been shattered. Thousands of ordinary, hard-working people are facing staggering debt, foreclosures on their homes, crushing health care costs, and the loss of their jobs and savings.

Moore begins with a definition of capitalism as "a system of giving and taking — mostly taking." He surveys the rise of the middle class after World War II left our competition in Europe and Japan in rubble. Then in the 1980s and 90s, unchecked capitalism made possible by deregulation during the Reagan and two Bush administrations created many winners today. There's the real estate broker who proudly calls himself a "Condo Vulture" because he's feeding off foreclosed properties. And the corporations who take out "dead peasant" insurance policies on their employees so that they often get a bigger payout when someone dies than do the surviving family members. And the judge who was bribed to increase his sentences of juvenile offenders charged with minor crimes so they'd spend more time in a privately owned detention center in Wilkes-Barre, Pennsylvania.

The filmmaker tells the moving stories of commercial airline pilots who earn so little money that they are forced to live on food stamps; of a couple whose farm is in foreclosure and who are hired by the bank kicking them out to clean the place and burn many of their possessions; and of the tearful workers in Chicago whose factory has been shut down without the pay they thought was guaranteed in their contract. There is an up-close and personal vignette where Moore and his father visit the vacant lot where the Ace Spark Plugs factory used to be; the senior Moore worked there for 34 years, considering his fellow employees family. Many of these businesses will never come back and have disappeared forever in the economic meltdown brought on the by greedy games of Wall Street wheeler-dealers.

One of the most surprising elements of Capitalism: A Love Story is the time given to an affirmation of Catholic priests who have condemned the excesses and rapaciousness of contemporary capitalism as immoral. Growing up in Michigan, Moore attended parochial school and as a boy wanted to become a priest. He was inspired by the passion of priests and nuns for social justice; he saw the Berrigan brothers as heroic figures. In this film, several priests are interviewed who point out how Jesus had harsh words for those whose lives are organized around selfish greed and pursuit of wealth.

Moore salutes cooperatively owned businesses where workers share decisions and spread the wealth equally. He supports the activism of Chicago workers who occupied the plant where they worked in an attempt to get Bank of America to pay them what they were owned. On the other hand, this documentary lambastes Congressional Republicans and Democrats for going along with the Bush administration's $700 billion economic bailout of the banks. Moore decides to visit those institutions to get some of the taxpayers' money back.

Moore yearns for the idealism of President Franklin D. Roosevelt who proposed a "Second Bill of Rights" during his State of the Union Address in 1944. He wanted to guarantee Americans of a job with a decent wage, a home, medical care, education, and even a vacation. After Roosevelt's death, his dream never came to pass in the U.S., but Europeans and the Japanese have put these rights into their social contract.

Moore provides a broad historical survey of the history of capitalism with clever visuals in this documentary. He introduces us to people whose stories we don't hear and voices in the U.S. Congress, such as Rep. Marcy Kaptur, Democrat from Ohio, who don't get a lot of airtime. But perhaps the symbolic makes the point best. Moore is shown unraveling a long "crime scene" yellow tape around Wall Street buildings. It's an image we won't soon forget.

Special features on the DVD include exclusive bonus material written and directed by Michael Moore; "Sorry, House-Flippers and Banks - You're Toast in Flint, MI"; "Congressman Cummings Dares to Speak the Unspeakable"; "The Omnivore's Dilemma? It's Capitalism"; "The Rich Don't Go to Heaven (There's a Special Place Reserved for Them!)"; "How to Run the Place Where You Work"; "Commie Taxi Drivers - 'You Talkin' To Me?' - in Wisconsin"; "What If, Just If, We Had Listened to Jimmy Carter in 1979?"; "The Socialist Bank of - North Dakota?"; "The Banks Kick Them Out, Max Kicks Them Back In"; and New York Times Pulitzer Prize Winner Chris Hedges on "The Killing Machine Known as Capitalism." 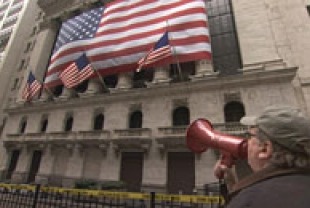 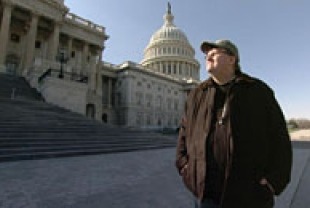 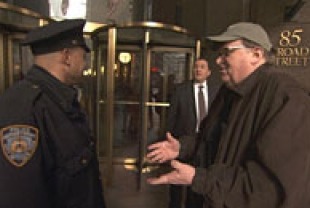