Directed by Ethan Coen, Joel Coen
A thought-provoking spiritual original that salutes the mystery of God, the futility of seeking answers, and the need to live as best we can.

Larry Gopnik (Michael Stuhlbarg) teaches physics at a Minnesota University in 1967. He lives in the suburbia with his wife Judith (Sri Lennick) and two children, Danny (Aaron Wolff) who is about to be bar mitzvahed, and Sarah (Jessica McManus), who is saving money for a nose job. Although Larry thinks that his life is on the right track, he is suddenly thrown off balance by a series of upsetting and weird developments.

It all begins when a Korean student (David Kang) tries to bribe the professor to raise his grade so he can keep his scholarship. At home, Larry's unemployed and eccentric brother Arthur (Richard Kind) continues to upset everyone with his bad habits; one of them is locking himself in the bathroom for long periods of time in order to drain a cyst on the back of his neck. Then Judith informs him that she has fallen in love with Sy Ableman (Fred Melamed), a widower friend, and wants not only a civil divorce but a get (religious divorce) so she can get married in the Jewish faith.

Proverbial wisdom tells us that when it rains, it pours. Trouble brings more trouble until we are knee-deep in it. Larry's aggressive and bigoted neighbor is planning to build a boat garage too near his property; the woman across the street who is sunbathing in the nude tempts him; and an account manager from Columbia Records Club is harassing him about payment for four months of titles which he did not order. In addition, this bedraggled physics professor learns that someone has been sending anonymous letters to the tenure committee besmirching his name with terrible allegations.

Larry turns to a friend, Mimi (Katherine Borowitz) for sympathy and advice. He laments, "Everything that I thought was one way turns out to be the opposite!" She responds: "Then it's an opportunity to learn how things really are. It's not always easy, deciphering what God is trying to tell you. . . . . But it's not something you have to figure out all by yourself. We're Jews, we have that well of tradition to draw on, to help understand. When we're puzzled, we have all the stories that have been handed down from people to people."

By now moviegoers are used to the fresh perspective and ethically rich dramas of Joel and Ethan Coen. A Serious Man stands as one of their most original works since The Big Lebowski, which is one of our favorite films. A Serious Man is a modern day Job story that brings us into a close encounter with suffering and loss, the ancient and universal questions about why good men often get the shaft while evil doers thrive, and the difficult questions we have about the nature of God and the meaning of our lives.

Feeling lonely, angry, and depressed after having to move out of his house into a motel, Larry turns to Rabbi Scott (Simon Helberg) for guidance. Still in his twenties, this young man of faith tells him to try a fresh perspective on the world and he will find Hashem (God) in the ordinary — even in a place such as a parking lot. Larry tries this approach but is saddled with another financial burden. Next, he turns to Rabbi Nachter (George Wyner) who tells him the story of a local Jewish dentist and his quest for Hashem after finding Hebrew letters spelling "help me, save me" engraved on the inside of a patient's teeth. Wanting to know more, the dentist keeps looking everywhere for divine signs but to no avail. Finally, he just returns to living his life, helping people along the way. There were no answers in the teeth, but helping others certainly can't hurt.

Larry is baffled by this story and conversation. "Why does Hashem make us feel the questions if the answers aren't going to be given?" Once again, the rabbi replies, "I don't know."

Larry desperately wants to see Rabbi Minda (Alan Mandel), an elderly sage with a very protective secretary. But Larry's son has an opportunity to see the wise man after his bar mitzvah. He surprises the boy by returning his radio which had been confiscated in Hebrew class. And then the sage recites some lines from Jefferson Airplane to him: "When the truth is found to be lies / And all the joy within you dies" — then what?

Larry and his family face many trials and tribulations but we know he learns from his suffering and losses. And the quotation from Jewish sage Rashi that flashed on the screen during the opening credits sinks into our consciousness: "Receive with simplicity everything that happens to you." We can't ever really know what is going on. And now the opening story set in the Ukraine and told in Yiddish makes even more sense. Ours is not to know or reason why, ours is to accept the mystery and live as best we can in the midst of a roiling sea of troubles and uncertainties. 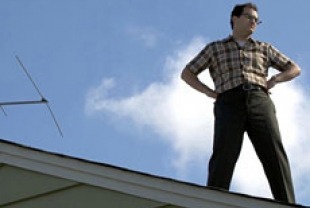