Directed by Wes Anderson
A delightful adaptation of a Roald Dahl children's tale about a charming, smart and cunning fox and his quest to be true to his animal nature.

In Medicine Cards: The Discovery of Power Through the Way of Animals by Jamie Sams and David Carson, fox is described as a wily, cunning, and swift-footed creature. Those who choose this animal as a totem will be blessed with the ability to adapt to change, become like the wind, and use their cunning nature in a positive way. The same could also be said of people who see Fantastic Mr. Fox.

In this frolicsome stop-motion animated feature based on Roald Dahl's (James and the Giant Peach) 1970 children's book, we meet a fox who taps into the wild animal inside of him and is proud of it. Wes Anderson (Rushmore, The Royal Tennenbaums, The Darjeeling Limited) directs this delightful film that is very clever and witty. It will appeal to the child within adults and the adult within children. It will speak to the animal in all of us.

Mr. Fox (voiced by George Clooney) has given up his old ways of raiding chicken houses at the bequest of his wife (Meryl Streep). He has a job as a columnist in a local newspaper. Restless as usual, he purchases a new house into a stately beech tree near three prosperous farms owned by Boggis, Bunce, and Bean. His son Ash (Jason Schwartzman) is unhappy that he doesn't measure up to his father as an athlete (once a star of the game whack-ball) or as a brilliant and charming talker. He turns unruly when his cousin Kristofferson (Eric Anderson) comes to stay with them for a spell. This oddball loves yoga and is accomplished in the martial arts.

Mr. Fox is tempted back to his old life when he realizes just what's available in the farms across the field. Even though Boggis, Bunce, and Bean have reputations as being powerful, violent, and mean, Mr. Fox decides to lead a series of raids on their farms. His targets: their chicken, geese, turkeys, and cider. Fox chooses two accomplices for this dangerous mission: his opossum pal Kyle (Wally Wolodarsky) and his nephew Kristofferson. The raids arouse the ire of the farmers, and they decide to fight back with an all-out attack on fox and his many supporters in the animal kingdom. The animals retreat underground until Mr. Fox comes up with a plan that will make them heroes.

The stop-motion animation in Fantastic Mr. Fox is delightful but the thing that holds the whole story together is the jaunty, egotistic, and irrepressible lead character voiced by George Clooney in a tour de force performance. Also featured are Bill Murray as Attorney Badger, Willem Dafoe as security guard Rat, and Owen Wilson as a coach of a whack-ball team. Spicing up the story is a funky musical soundtrack, some wry observations on the competition between fathers and sons, and a celebration of the idea that one has to be true to one's true nature, no matter what.

Special features on the DVD include behind-the-scenes extras: from script to screen; "Still Life" (a puppet animation); and a beginner's guide to whack-bat. 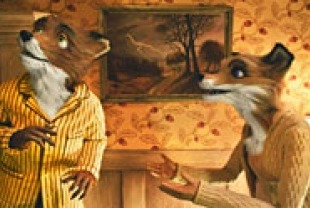 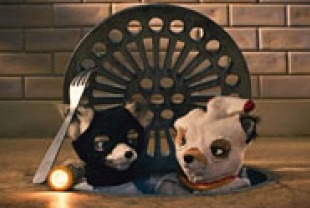