Directed by Chris Weitz
Vividly captures and conveys the intense yearning of a teenage girl and her desperate desire for the deep intimacy of love.

Yearning is a force field that takes us beyond ourselves. It fuels our need for intimacy; it enlarges our capacity to know and be known; it enables us to cross borders to new places; it stirs our fascination with beauty and mystery; and it animates our erotic feelings and sends us whirling into the wonderful dance of sexuality. We're convinced that the yearning of youth in particular explains the enormous popularity of the Twilight series. Stephanie Meyer's books have sold more than 85 million copies worldwide and spawned hundreds of websites. The first of four films, Twilight, grossed $383 million worldwide. The second, New Moon, takes yearning to a whole other degree.

There have been plenty of stories and films about love and love lost, but few which have tapped into the enormous power of adolescent desire. Perhaps the most well known is Shakespeare's Romeo and Juliet, which is briefly mentioned in a high school English class in this film. And rock music, of course, is often propelled by yearning. New Moon focuses on the yearning for what seems lost or unattainable, a yearning that will require risks and transformation to be fulfilled.

Bella (Kristen Stewart) is a senior in high school in Forks, Washington, where her father Charlie (Billy Burke) is the Chief of Police. She's been having bad dreams that cause her to scream out in the night. Just after her 18th birthday, Edward (Robert Pattinson), the vampire who is the love of her life, decides that she is in grave danger as long as she stays closely connected with him. He decides to sacrifice their romance to protect her and leaves town. But Edward's exit from Bella's day-by-day existence plunges her into a pit of depression. She chooses to isolate herself from a circle of friends and doesn't even respond to her father's efforts to help. She does reach out of the darkness for the hand of Jake (Taylor Lautner), a kind-hearted Native American who has built up his body with weight lifting and other exertions. He mistakes her friendship for affection and then is shocked to discover that Bella has a need for adrenalin-pumping thrills, causing her to take unusual risks. He becomes her new protector, but he has a secret that threatens their relationship.

Chris Weitz directs this moody and emotionally turbulent movie that also takes Bella into a close encounter with a pack of huge and vicious werewolves, two vampire assassins who want to kill her, a reunion with Dr. Carlisle Cullen (Peter Facinelli) and his extended vampire family, and a visit to Italy for a meeting with the Volturi, a royal Italian vampire council.

The action sequences work with varying degrees of success. The real focus is on the emotional states of Bella and the consequences of her desperate yearning to fulfill her love for Edward. Desire fills every frame of the drama — many of them close-ups. It is a theme that has universal dimensions and is rarely so intensely explored in films. 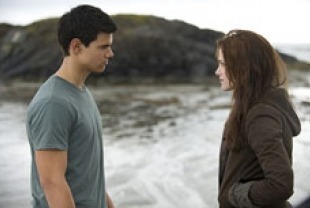 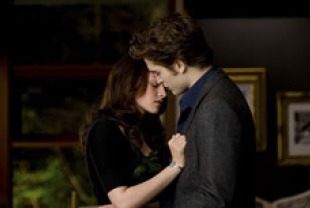 PG-13 - some violence and action